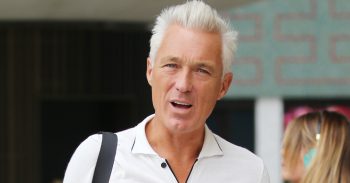 He doesn't mind making fun of himself

Former EastEnders actor Martin Kemp could be set to star in a documentary film alongside his brother Gary.

The 57-year-old, who played Walford villain Steve Owen from 1998 until 2002, has hinted that a new tell-all film could be in the works.

As Martin and Gary were both members of ’80s synth-pop group Spandau Ballet, it’s believed the documentary could follow a similar format to the popular BBC Four film Bros: After The Screaming Stops.

According to The Daily Mail, Martin was asked about the prospect of a film and had a rather coy reply.

He said: “A mockumentary? Oh, maybe. I’m not going to say any more.

He added: “You have to before somebody else does it.”

Bros: After the Screaming Stops, which aired over Christmas, followed popstar brothers Luke and Matt Goss as they prepared for a reunion gig at the O2 Arena.

Viewers were in stitches over the film’s unintentionally hilarious one liners, which had many comparing it to the likes of The Office and Alan Partridge.

Martin and Gary rose to fame in the 1980s as Spandau Ballet alongside band members Steve Norman, Tony Hadley and John Keeble.

Though they found success with a number of hits, including True, Gold and To Cut A Long Story Short, the group fell apart in 1990 as Tony, John and Steve tried, unsuccessfully, to sue Gary over royalties.

But they resolved their differences to reunite in 2009 and launch a tour five years later.

Tony Hadley parted ways with the band in 2017, announcing on Twitter that he was leaving and citing “circumstances beyond my control”.

The band hit back with a counter statement, and Martin himself took a swipe at Tony in The Sun by claiming his departure was “stealing special moments” from both the band and its fans.

Would you tune in for a documentary film about Martin and Gary? Leave us a comment on our Facebook page @EntertainmentDailyFix and let us know what you think.