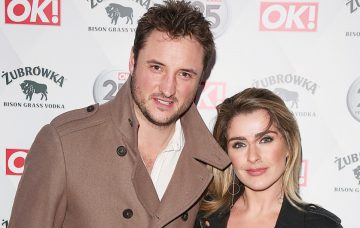 James Bye is “over the moon” to be expecting his third child with wife Victoria after struggling to get pregnant again.

The EastEnders star and his spouse have revealed they are they are set to become parents to a “miracle” little boy after Victoria was diagnosed with the painful condition, endometriosis, in which tissue that normally lines the inside of the uterus – the endometrium – grows outside the muscular organ.

They already have Edward, five, and Louis, two, together.

Victoria told the latest issue of OK! magazine: “I fell pregnant really quickly with both Edward and Louis, so when we started trying for our third early last summer, we thought we’d fall pregnant quickly again.

“We tried for a couple of months and nothing happened. Then I began suffering from aches and pains in my abdominal area. I went for tests and it transpired I had severe endometriosis.”

Victoria says they were told that it was a miracle that she had given birth easily to Edward and Louis, let alone fall pregnant again.

The pair had given up hope of ever having another baby, and were “surprised” to see a positive pregnancy test result after they attended the Soap Awards in June.

She recalled: “We thought our baby-making days were over. Month after month, we’d see negative tests.

“But then in June we went to the Soap Awards and I didn’t fancy drinking, which is unlike me.

“When we got home I did a test and it was positive – we were so surprised!”

James – who is best known for playing Martin Fowler on the long-running BBC One soap – is thrilled that he is having a third son as the little tot completes his dream of having a “golf team” with his boys.

He smiled:  “I’m over the moon it’s a boy. I play a lot of golf and you tend to go out in a group of four, so I have my future golf team ready now!”

Leave your congratulatory messages for James and Victoria on our Facebook page @EntertainmentDailyFix.