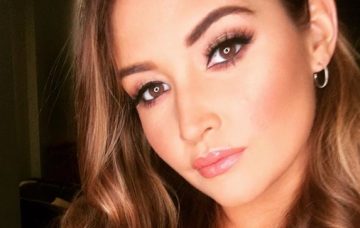 EastEnders actress, Jacqueline Jossa has spoken out about her pregnancy, admitting she and husband Dan Osborne already know whether they’re having a boy or girl.

Speaking in a video for her brand new YouTube channel – “Jacqueline’s World” – the TV star added two videos where she answered fan questions.

One of her followers asked: “Do you think you’re having a boy or girl?”

She answered: “It’s really hard to say because I already know…”

She pulled a funny face and added: “So I cannot answer the question!”

Jacqueline is married to former TOWIE star Dan, 26, and the pair already have a daughter, Ella, three.

They announced their second pregnancy in January, and Jacqueline added that she was very scared when they found out.

In the video she read out the question: “How did you feel when you first found out you were pregnant with your second?

“Were you scared or worried?”

The Londoner shouted: “Yes! I was terrified, which is weird, because I didn’t think I would be, but I was like, ‘I’m not telling my mum!’

She added: “It’s stupid, I know it’s so stupid. Also, I was leaving EastEnders and I had a plan! I was going to get another job quickly. And obviously that’s been halted, and I was like… OK.

“Now I’m excited, but I was really nervous. You’ve still got to push out a baby at the end of the day!”

The TV star – who recently confirmed her character Lauren had left the BBC soap – also said her second pregnancy had been much harder this time.

She said: “I was really , really sick this time round. I’m 22 weeks now, so things have sort-of slowed down. I’m feeling a lot better. Not as tired or drained.”

She added that she and Dan won’t be having anymore kids, saying: “I think I’m done now”, and confirmed she’s hoping to get her career back on track after baby number two.

She said: “[I’ve been] stopped in my tracks, because there’s another baby in my tummy. But I definitely feel that fire now, I’m really, really ready for this new [acting] adventure.

After baby two, I will definitely be getting back into acting, and maybe some singing.”

Jacqueline, 25, also admitted in the video, posted on Sunday, that she was a “little bit nervous” about her new YouTube channel.

She wrote in the caption: “Please go easy on me, I am new to this and realise I have a lot to learn, this is done very quickly as I have a flight to catch and I really wanted to get something out to you guys before I went away, but haven’t been able to post yet due to contract clashes!

“This is so exciting please be nice to me! I am learning. comment below! so much love for everyone who SUBSCRIBED already with no videos!! thanks so much and enjoy!”

Jacqueline has previously hinted that she’d be finding out the sex of her baby, telling OK! magazine: “I don’t deal very well with surprises so it would be better for me to find out, but at the same time I think it would be nice to wait.

“Neither of us mind if it’s a boy or a girl but for Ella’s sake I think it would be nice for her to have a sister.”

Dan admitted the news was a surprise and the couple hadn’t been trying. He explained: “We hadn’t been trying so it was a huge shock. I think I’m still getting my head around it. Kids are a blessing but… I’m not going to lie, I feel quite scared!”

We can’t wait to see what other videos she posts in the coming months.

Do you think these two will have another girl? Leave us a comment on our Facebook page @EntertainmentDailyFix and let us know what you think!