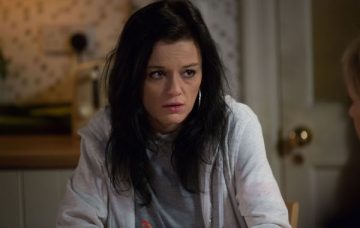 EastEnders fans declare soap is “so much better without Hayley”

Do you miss her character?

Hayley Slater is currently AWOL, with neither her family or viewers aware of her whereabouts.

Although she left in a bad way, suffering from a post-natal breakdown after the birth of her baby Cherry, some fans can’t find any sympathy for the character and have stated that they’re glad she’s gone.

Sparking a debate on Digital Spy’s Forum, one user wrote: “EastEnders is so much better without Hayley. [The soap] has improved ten-fold since the awful Hayley has been gone. I hope she doesn’t come back.”

Another agreed, adding: “I haven’t missed Hayley. I’d forgotten all about her.”

A third said: “I haven’t missed Hayley, and really don’t want her back.”

“100%,’ said another. “The character was a self-pitying misery-guts who just went round in endless circles.”

Another even hoped the whole of the Slater family would go missing, too! But wouldn’t Walford be SO quiet?

Not everyone agreed, however, with one saying: “I’m one of the only few who like Hayley, so I disagree. I think she’d be the only Slater to help Jean.”

Others agreed the character needed a rest, but hope she comes back changed.

One said: “I like her, they just need to do away with the self pity.”

Another agreed, saying: “I don’t dislike Hayley as a character, but I really did start to get sick and tired of the constant rinse and repeat scripts on a loop for months. If ever a character needed to be rested it was her. I do hope she returns and they can take her in a new, slightly more positive direction.”

Others hoped she returns “more mature”.

There has been no confirmation from the BBC soap that the character has been axed, more likely she’s having a break after a huge Christmas storyline.

We last saw the new mum in February, when she discharged herself from the hospital where she was staying after suffering a post-natal breakdown.

According to Stacey, the nurses at the hospital know where Hayley has gone but won’t disclose her whereabouts as she asked them not to.

She left a note for her baby girl saying she loved her and might come back for her one day.

With both mum Hayley and dad Alfie currently anywhere but Albert Square, the remaining Slaters are caring for four-month old Cherry.

Do you miss Hayley Slater? Leave us a comment on our Facebook page @EntertainmentDailyFix and let us know what you think!