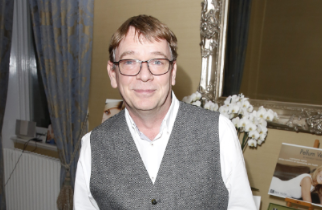 Adam Woodyatt has shared his pride over the recovery of his son, Sam, who has taken part in an athletic cheerleading competition after being seriously injured in a car crash just 19 months ago.

The 19-year-old son of the EastEnders legend was lucky to survive the smash which led to him being put in an induced coma while his pelvis was rebuilt.

He was wheelchair bound for a time as he had to learn to walk again.

But you wouldn’t know it now as he’s since run a marathon and taken up cheerleading, with his squad recently competing in the Cheer Worlds tournament in Florida.

Sharing his pride at how far his son has come, Adam wrote on Twitter: “We are all so proud of @SamJWoodyatt

“19 months ago he got hit by a car at 56mph, somehow he survived. He was put in an induced coma by @LDNairamb and spent 8 weeks in a wheelchair. 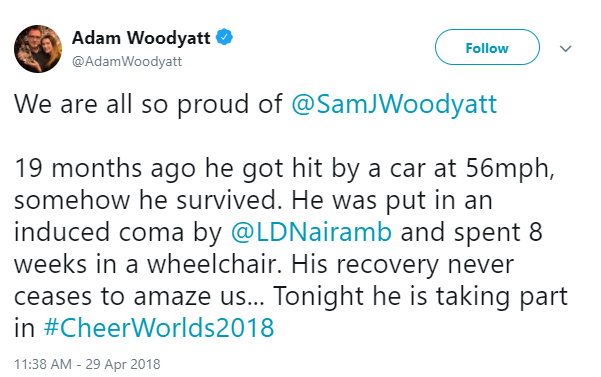 Fans of the actor, who has played Ian Beale on Albert Square for decades, sent their best wishes.

“Great to hear what’s he’s achieving. Great recovery for your lad. You should rightly be proud Adam,” said one.

“Wow. This is amazing news. So pleased for you all,” said another.

Among the well-wishers was Ian’s co-star Bonnie Langford, who pays Carmel in EastEnders, who sent a hug and a heart emoji.

London’s Air Ambulance, who treated Sam after the car crash, also tweeted to say: “It’s wonderful to hear that Sam is doing so well, hope he had a great time last night. All the best from the team here.”

Last year, father-of-two Adam, 49, and Sam both ran the London Marathon to raise money for the service which helped save his life.

Adam’s training was written in to EastEnders to explain why his character had suddenly lost so much weight and looked fitter.

On the soap, Ian had to take up exercise and healthy eating after he was told he was in danger of developing type 2 diabetes.

After the marathon, Adam praised his son again, saying it was miraculous he had finished in four hours and 24 minutes when months before he had been unable to walk.

Adam finished hours later, admitting he had stopped off on the route for an ice cream!

Sam has also shared his miraculous recovery on his Instagram account, with videos of him practising for cheerleading at the gym doing somersaults and back flips.