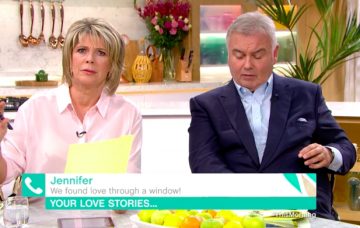 Eamonn makes a cheeky joke to giggly Ruth on This Morning

We all know they love a bit of on-air bickering, but Eamonn Holmes risked taking the teasing too far on Tuesday’s This Morning, when he made a comment about his wife Ruth Langsford’s weight!

It started out as a sweet story from the veteran TV presenter about when he first saw his future wife.

In the segment about love stories, he asked Ruth, 58: “I believe in love at first sight, do you?”

They finally married in 2010 and now live in Surrey with their rescue dog, Maggie.

After working together for 15 years, Eamonn recently confirmed they have “rules” for separating their work and home life.

He told OK! magazine: “We do have rules, I say to Ruth, let’s sit down and consult on the interviews we’re doing tomorrow, and Ruth just says no. The rules are the rules, Ruth doesn’t like to rehearse anything.”

She confirmed: “I don’t like taking my work home with me. That’s what I say, if you’re not married and just co-presenters, you go home to different homes.”

Eamonn continued: “It just means it’s a very real relationship, warts and all. That can be a plus and that can be a minus. I think it gives people a lot of curiosity.”

It comes just one day after a diet expert confronted Eamonn over his weight.

On Monday’s episode of Good Morning Britain, presenters Kate Garraway and Eamonn Holmes were hosting a segment on whether doctors should tell patients to lose weight – and one of the experts confronted Eamonn about his size.

The two expert guests argued the point back and forth, with weight loss expert Steve insisting we should be warning larger patients.

Kate then asked him what he would say to Eamonn.

Steve told the 58-year-old TV star: “I would say to Eamonn that he is too fat, and he is a heart attack waiting to happen.”

The Northern Irish star told him: “You know I agree with you.”

Let’s all just lay off the weight comments, eh guys? It seems like the safe option all round…

Would you let your partner make a joke like this?! Leave us a comment on our Facebook page @EntertainmentDailyFix and let us know what you think.