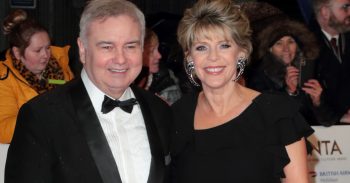 Television presenter Eamonn Holmes has shared an emotional tribute to his late sister-in-law Julia, who passed away last week following a long illness.

This Morning host Eamonn posted the poignant tribute as he revealed that he and wife Ruth Langsford wouldn’t be celebrating their ninth wedding anniversary today (June 26).

Read more: Kate Wright jets off to Mykonos for her hen weekend

Last week, Ruth revealed that her beloved sister had passed away at the age of 62.

She said: “My lovely Sis Julia has sadly died after a very long illness.”

Revealing that her heart was “completely broken”, Ruth added: “She was the kindest and most gentle soul and I will miss her forever.”

With Rylan Clark-Neal stepping into her shoes to present This Morning alongside Eamonn last Friday, Ruth added: “As I am sure you will appreciate I need to take time to grieve with my family. Thank you for your understanding.”

Eamonn also took to Instagram to thank Rylan for his support.

Sharing a photograph of himself with his presenting pal, he said: “A friend in need is a friend indeed. For on and off screen Rylan, thank you for being there.”

He also revealed that Rylan had been a “great comfort” to his wife after her bereavement.

Speaking to the Express in 2010, Julia revealed that Ruth had been helping her cope with her battle with depression.

Julia said: “Ruth has been really supportive. I’d phone her in tears and go stay with her.”

She added: “She encourages me to have more confidence in myself and, when I’m trying to do too much, she has taught me to say no and look after myself a bit more. She’s the best sister anyone could have.”