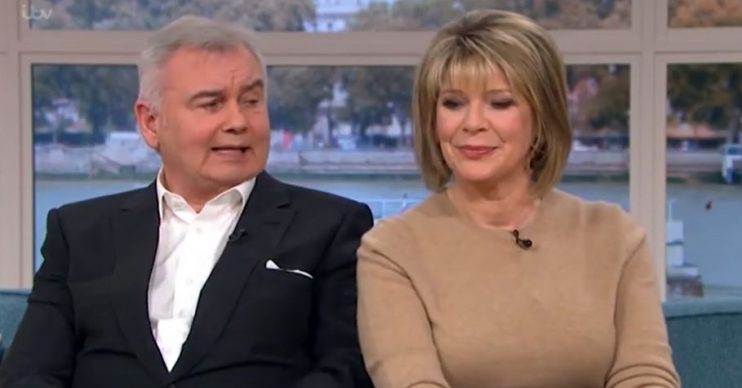 Presenter Eamonn Holmes cracked a rather crude joke on This Morning as he told viewers he was in for a “fun night” with his wife and co-host Ruth Langsford.

The daytime TV favourites, both 59, were introducing the segments on today’s (15.11.19) episode of the programme when they heard the song You’re Beautiful by James Blunt, who was due to perform in the studio.

Eamonn said: “It is true you are beautiful, I said play that one for my Ruth. I did, darling.”

Turning to This Morning agony aunt Deidre Sanders, he continued: “That’s good advice. I give you good advice on that one, yeah.”

Ruth sat smiling as Eamonn pressed on: “It’ll be Friday fun night now, after that…”

Ruth could only giggle and agree.

It’s not the first time Eamonn – who tied the knot with Ruth in 2010 – has proven he’s not afraid to push his luck with rude jokes on This Morning, even when his teenage son’s within earshot.

In August, he left 17-year-old Jack cringing when he joked that he enjoys a bit of “cheeky toast” with Ruth in the morning before breakfast.

Jack was in another part of the studio as the couple chatted with Love Island 2019 star Ovie Soko while introducing a cooking segment.

It’ll be Friday fun night after that, yeah?

Ovie revealed, when asked about his favourite brunch: “Well, some scrambled eggs, a little bit of avocado’s always good for you and then, cheeky toast.”

Eamonn quipped: “I’m looking for that before you say, ‘I want my breakfast.’ Like clockwork my wife is in the morning! I say, ‘Any chance of some cheeky toast?’ and she goes, ‘No, I’m starving, I want my breakfast’.”

'One day son, you’ll know the meaning of a bit of cheeky toast!' @EamonnHolmes and @RuthieeL have no chill… poor Jack! pic.twitter.com/l0OTtbmX4K

Ruth burst into laughter and said: “Can I just say our 17-year-old son is here, have you forgotten? Look at him, he’s mortified!”

Ruth, similarly, isn’t afraid to poke fun at Eamonn while they’re live on air, as she did this summer when it was revealed her husband’s image had been used in an online scam about erectile dysfunction remedies.

What did you think of Eamonn’s joke? Leave us a comment on our Facebook page @EntertainmentDailyFix and let us know.