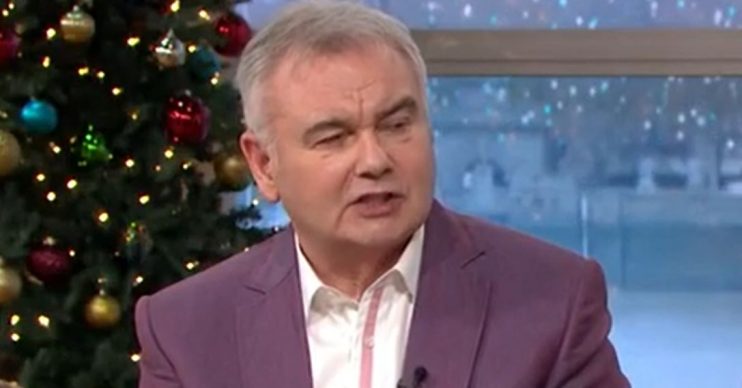 On Friday's This Morning

Presenter Eamonn Holmes has taken a fresh swipe at Meghan Markle by branding her “trouble”.

The 60-year-old daytime TV favourite, who was caught up in a race row last month when he described the Duchess of Sussex as “uppity”, criticised the royal and her husband Prince Harry on today’s (20.12.19) episode of This Morning.

Eamonn and his wife and co-host Ruth Langsford were joined on the sofa by royal correspondent Camilla Tominey, who explained what to expect from the Royal family over Christmas.

The trouble couple, Harry and Meghan.

Towards the end of the conversation, Eamonn asked Camilla for some predictions on what the Sussexes are likely to get up to in 2020.

He said: “I want you to do your Mystic Meg thing, look into your crystal ball. The trouble couple, Harry and Meghan – what do you think, next year?”

Camilla replied: “Well, they’ve had this period of reflection, obviously, because they’ve been out of the limelight for six weeks.

“And I just hope, really, that they look at the Queen’s example and appreciate that over more than six decades, through good times and in bad, even when personally she hasn’t agreed with the decisions she’s had to make, she’s always put duty first.

“That’s why [the Queen] is so endearingly popular.”

It follows reports of a viewer’s complaint to Ofcom after Eamonn used the word “uppity”, a term with racial connotations, in a conversation about the Duchess not wanting to have her picture taken in the royal box at this year’s Wimbledon tournament.

He said on the show in July: “If you have an uppity attitude, you’re only through the door two minutes and suddenly you’re sitting at Wimbledon and your royal protection are saying, ‘No photographs, no photographs!'”

One viewer is said to have complained to the media regulator and wrote to ITV’s head of diversity Ade Rawcliffe about the comment.

The word “uppity” was a slur used in 19th-century America to insult black people who ‘didn’t know their place’.

It’s now reportedly banned from being used on the show, while This Morning bosses are believed to have written a letter of apology to the viewer.