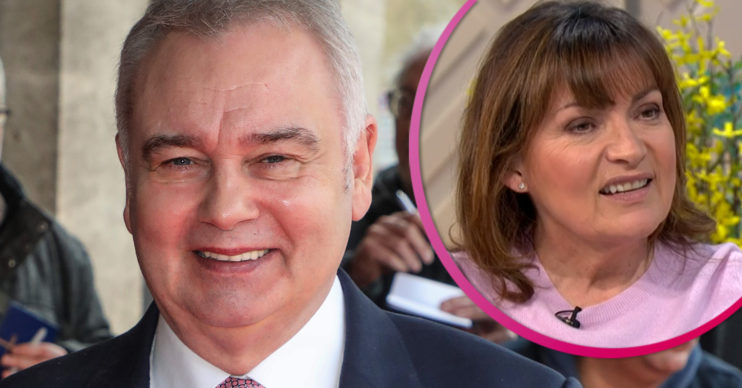 Eamonn went to hospital on Thursday to have tests

Eamonn Holmes underwent tests at hospital after suffering from “chronic pain” but appears to be back home.

The This Morning presenter, 61, told fans on Thursday (April 1) that he was at hospital to find out what was causing his pain.

Alongside a photo of himself at hospital, he admitted the pain was “like I’ve never experienced in my life”.

Now, according to Lorraine Kelly, the star will be back on This Morning next week.

What’s the latest on Eamonn Holmes after his hospital dash?

Lorraine said on Friday’s show: “I know that everybody would want to wish our Eamonn a speedy recovery.

“He’s not been too well. He’s in chronic pain and had to go to hospital yesterday.

“But he will definitely be on This Morning next week, nothing’s going to stop him.”

On Thursday, Eamonn shared a photo of himself wearing a mask at hospital.

He wrote on Twitter: “At hospital… pain like I’ve never experienced in my life. Need to find out what’s causing this. Wish me well.”

In addition, he said: “Will have clearer picture of what’s causing my pain tomorrow but just to say folks like so many of you I’ve lived with variations of Chronic pain for years.

“Don’t allow it to stop me working & next week I’d like to be a voice for many of you & discuss the subject on @thismorning.”

Meanwhile, in another tweet, Eamonn admitted he was “proud” that his experience “has given you a voice”.

He added: “I’m humbled by your various and different experiences & your kindness to me.

“If between us we can get more solutions more understanding and more resources directed towards CP then that would be a result.”

Earlier this week, Eamonn took to Twitter to reveal he was having physio for his chronic pain.

Sharing a photo of himself lying on a physio table, Eamonn wrote: “Starting the day by tackling the pain from the night before.

“On the physio table. Chronic pain. Just can’t get it to go away.”

Read more: Eamonn Holmes and Ruth Langsford returning to This Morning next week

Eamonn added: “Sadly so many of you know the feeling. Thanks for sharing your stories.

“I’m determined to beat this… however much it hurts.”

Send your well-wishes to Eamonn on our Facebook page @EntertainmentDailyFix.