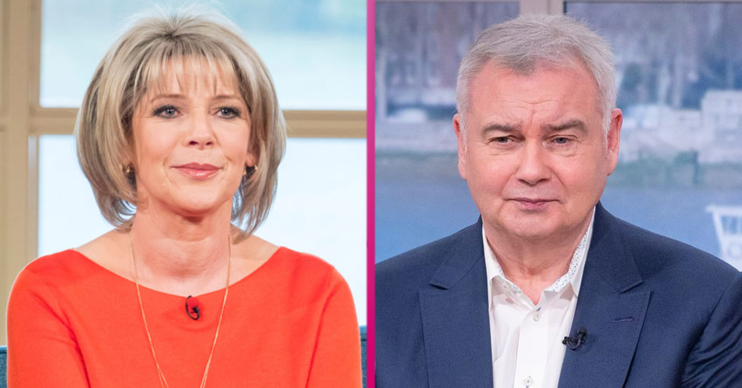 The This Morning pair are known for their banter

Ruth Langsford and Eamonn Holmes are both beloved and infamous for their incessant banter and bickering.

And the This Morning hostess has just admitted that hubby Eamonn thinks she “runs like a camel”.

The This Morning star shared on social media that she was trying to take up jogging.

Ruth shared a video of her huffing and puffing on Instagram while walking her rescue pooch Maggie.

Sharing in view of her some 915,000 Instagram followers, she said: “Evening! Excuse me panting.

“I’m out for a walk with Maggie and then I thought no one is around – I might just break out into a little run.”

Ruth added: “Well I say run. It is more like a trot. I’ve done it twice now. I’m worn out.

“I need to do a bit more cardio. But I don’t really like running very much.”

Laughing to herself, Ruth added: “And Eamonn always says I run like a camel. So I try to do it when no one else is about!”

She then joked on her video’s caption that her new hobby has taken her quite by surprise.

Several of her celebrity pals seem keen to join Ruth for one of her upcoming jaunts.

Lizzie Cundy wrote: “My keep fit gear is on!!” and Lucy Alexander posted: “Omg what’s happening… leaving me well behind…”

And Trisha Goddard advised: “Do scout’s pace; ‘trot’ for around 15 to 30 seconds, and then walk for a minute… It’s a great way to up your cardio.”

As for Eamonn’s rather cheeky comment, the pair are known for constantly taking the mick out of one another on This Morning.

Just this Monday the pair got into some testy banter over Eamonn’s kitchen cleaning skills.

Eamonn claimed he was starving after cleaning the kitchen over the weekend.

Ruth replied: “As you can tell by the hilarity in the studio, that’s an utter lie.”

Eamonn snapped back: “Not a lie, how can you do that?” and Ruth retorted: “You put some things in the dishwasher.”

The disgruntled Irishman went on to say he had emptied and loaded the dishwasher – without a word of thanks.

What do you think of Ruth’s fitness efforts? Leave us a comment on our Facebook page @EntertainmentDailyFix.