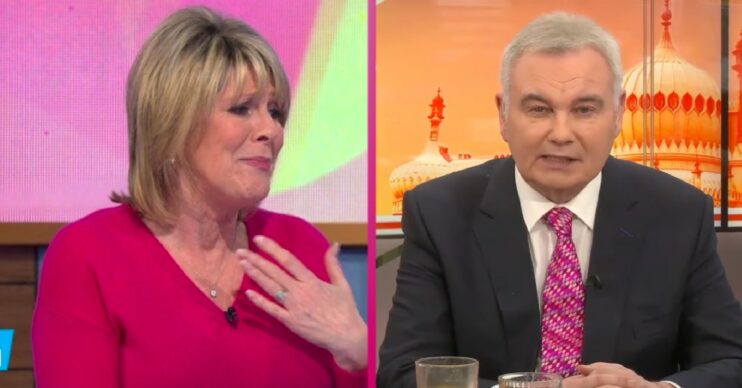 Eamonn isn't a fan of "political correctness" on TV

Eamonn Holmes has slammed the “woke brigade” in a new interview when discussing his comments about wife Ruth Langsford.

The GB News presenter hit back at criticism that he had “fat-shamed” Ruth on TV last February.

What did Eamonn Holmes say about Ruth Langsford?

Almost a year ago to the day, Eamonn was accused of “fat-shaming” Ruth during a segment on This Morning.

Eamonn’s comments came during a game on the show, where the couple had to guess which celebrity was on the screen behind them, without turning around.

Fans called in to give the couple clues as to which celebrity was behind them.

Eamonn’s jibe at Ruth came when a picture of Kate Middleton was on the screen.

“She’s very thin,” was the clue a viewer gave the pair.

Ruth ignored her husband’s jokey remark, but viewers didn’t, with many branding the 62-year-old “rude”.

Now, almost a year on, the Northern Irish presenter has hit back at those who criticised him for “fat-shaming” Ruth at the time.

During an interview with The Times, the star slammed the “woke brigade”, and had his say on “politically correct” TV.

Eamonn assured readers that his jibe at Ruth was made in good fun. He said that Ruth tells him that if he wasn’t funny, she wouldn’t be with him. He then said that they’re able to make jokes about each other as they’re confident enough in themselves.

“If I ever make a joke about Ruth, it’s obvious that my backside is bigger than hers,” he continued.

“But then you get this whole brigade who go, ‘Has he just fat-shamed his wife on TV.

“It’s funny. But apparently, it is not funny anymore.”

Eamonn then went on to joke that being politically correct on TV these days means viewers won’t be able to experience older people’s humour.

What else has the presenter been up to?

Eamonn’s criticism of the “woke brigade” come during a tough time for the presenter.

During the same interview with the Times, the GB News presenter confessed that the last 10 months have been “hellish“.

The presenter has been battling chronic pain after suffering from three slipped discs in 2021.

He has now claimed that he fears that Ruth will become his carer soon.

It’s also been reported recently that Phillip Schofield hasn’t been in touch with Eamonn since he began his new job at GB News.

“Phillip hasn’t contacted Eamonn since leaving This Morning, which is a bit of a shame,” they said.

You can catch Eamonn Holmes every weekday morning on GB News at 6 am.

What do you think of Eamonn’s comments? Head to our Facebook page @EntertainmentDailyFix and let us know!