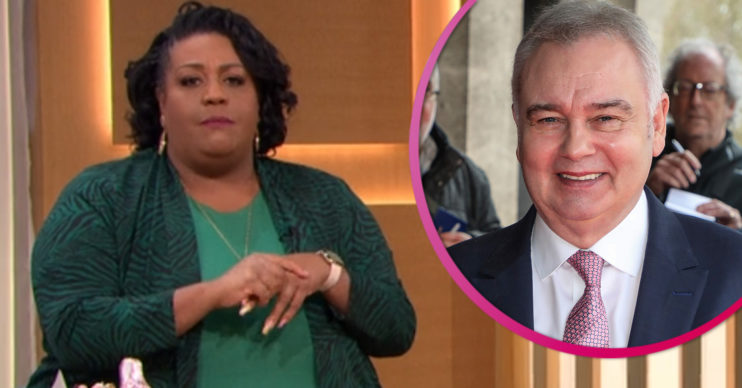 Eamonn went to hospital after suffering from chronic pain

Eamonn Holmes will be back on This Morning next week after having tests in hospital, Alison Hammond confirmed as she sent her well-wishes.

On Friday’s This Morning, Alison and Dermot O’Leary sent their love to Eamonn.

What did Alison say about Eamonn Holmes?

Alison said: “Eamonn and Ruth [Langsford] will be back next week.

Read more: Eamonn Holmes will be on This Morning next week after hospital dash

“I wanted to wish Eamonn all the best because he had to seek some treatment in hospital for chronic pain.

“Eamonn, we are sending all our love to you from all the team.”

Earlier today, Lorraine Kelly gave an update on Eamonn and also confirmed he would be back on This Morning next week.

She said: “I know that everybody would want to wish our Eamonn a speedy recovery.

Eamonn, we are sending all our love to you from all the team.

“He’s not been too well. He’s in chronic pain and had to go to hospital yesterday.

“But he will definitely be on This Morning next week, nothing’s going to stop him.”

On Thursday, Eamonn confirmed he was at hospital alongside a photo of himself wearing a face mask.

What did Eamonn say about being in hospital?

He wrote on Twitter: “At hospital… pain like I’ve never experienced in my life. Need to find out what’s causing this. Wish me well.”

In addition, he said: “Will have clearer picture of what’s causing my pain tomorrow but just to say folks like so many of you I’ve lived with variations of Chronic pain for years.

“Don’t allow it to stop me working & next week I’d like to be a voice for many of you & discuss the subject on @thismorning.”

Send your well-wishes to Eamonn on our Facebook page @EntertainmentDailyFix.