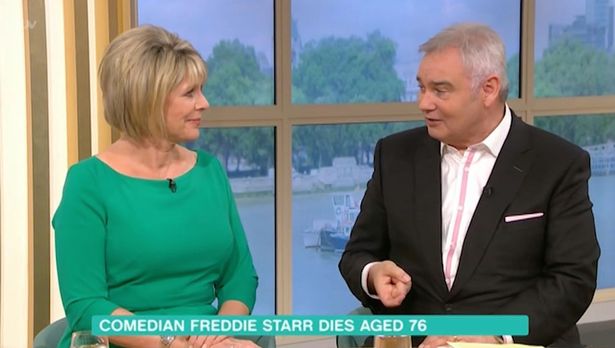 The pair met in an unlikely location

This Morning host Eamonn Holmes has opened up about the last time he saw comedian Freddie Starr, who has died at the age of 76.

During a segment on Friday (May 10), Eamonn and wife Ruth Langsford discussed the comic’s tragic death which was reported the night before.

As the pair announced the sad news of Freddie’s death, Eamonn recalled the last time he had ever seen the entertainer.

He told viewers: “The last time I saw him was at the Oxford service station on the M40.

“It was probably the only sensible, normal conversation I’ve ever had with him.”

Ruth added: “He was quite hard to interview, wasn’t he?”

The late comedian was known for his madcap sense of humour and for the infamous The Sun story that he’d eaten a hamster.

In his autobiography, Freddie maintained he had “never eaten or even nibbled a live hamster, gerbil, guinea pig, mouse, shrew, vole or any other small mammal”.

His body was discovered by his carer at his townhouse in Feungirola on Thursday afternoon.

He continued: “I just have to say thank you all from the bottom of my heart for all the kind comments and messages, it really does mean a lot so thank you to each and every one of you, thanks so much. Freddie.”

In February he shared a typically wacky image to the social media platform, featuring him with cigarettes in his mouth, nose and ears.

Merseyside-born Freddie rose to fame in the early ’70s, appearing on TV shows Opportunity Knocks and the Royal Variety Performance.

He was forced to leave the show after collapsing, a year after undergoing a quadruple heart bypass.

Freddie had a history of heart problems and asthma and, while no cause of death has officially been confirmed, police sources told The Sun they believe he died from natural causes.

What are your memories of Freddie Starr? Leave us a comment on our Facebook page @EntertainmentDailyFix and let us know what you think!