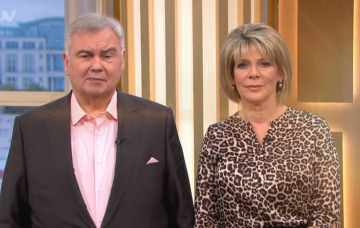 Eamonn Holmes reveals he was hospitalised after panic attack on air

He said he thought he was going to die

Eamonn Holmes has revealed he was once left hospitalised after suffering a panic attack on air.

On Thursday’s This Morning, the presenter and his wife Ruth Langsford spoke to guest Sophie Mei Lan, who films her panic attacks for her 25,000 YouTube subscribers to see.

Speaking about his own past mental health struggles, Eamonn said he used to suffer from panic attacks almost 30 years ago when he was a young BBC presenter.

He explained: “I’ve had a number of panic attacks, thank goodness all 27 or something years ago now.

“I thought I was going to die. My coping strategy eventually was, ‘I’m not going to die.’ I would never have associated it with a mental problem.”

Eamonn added: “I think looking back at it, it was the result of the sudden death of my father and not being able to say goodbye to him.

“And I think that then came on and I associated it with being away from home and with bad things.”

Giving advice to Sophie, Eamonn said: “I’ve came through that and it’s never happened to me again in 27 years.

“It happened once on air presenting for BBC television and it doesn’t get much worse than that, having to cover it up. Both times I was hospitalised from it, but yet it’s never come back.

Sophie, who once auditioned on Britain’s Got Talent as a belly dancer, explained that she has been documenting her mental health issues and her struggle with parenthood.

She said: “The first time I vlogged was during a psychotic episode. I was suffering from paranoia.

“I started to document them because it made me see whilst I was suicidal, there was a way out. I can see how I’ve been there before, but I can get through it.”

Can you relate to Sophie or Eamonn’s comments? Leave us a comment on our Facebook page @EntertainmentDailyFix and let us know what you think!