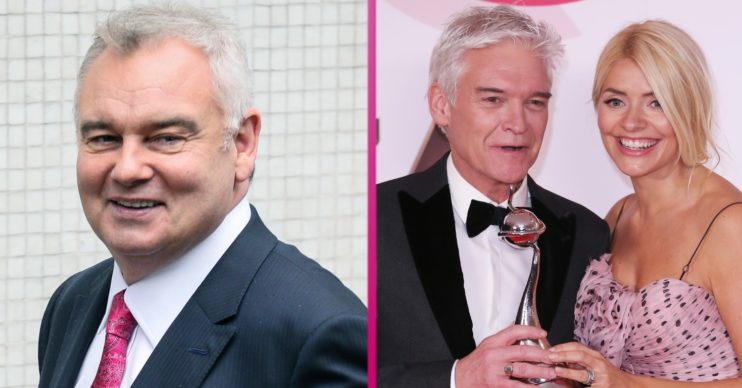 The presenter, 60, has had to reduce his This Morning hosting duties with wife Ruth Langsford, as Phillip and Holly return from their summer holidays.

But it seems like he’d rather stay on the show four days a week judging by his response to one disgruntled fan’s tweet.

A Twitter user posted: “@EamonnHolmes not being funny but can you & Ruth stop on, the other 2 muck about too much, you stop on & let them do Fridays it’s nice watching presenters more my age.”

We can only guess that the “other 2” refers to Holly and Phil.

Eamonn not only liked the tweet but he followed up with several praying hands emojis.

Many viewers appear to agree with the user’s sentiment judging by its additional replies.

One user replied: “I certainly prefer Friday morning show they are more my age & they don’t shove things down my throat.”

Another agreed with: “Yeah, it’s actually far more watchable – the “trying to make the presenter laugh” with innuendo etc. has worn very thin.”

Are you Team Phillip Schofield or Team Eamonn Holmes?

However, all is not lost, as Ruth and Eamonn will still host This Morning each Friday.

Despite these viewers pining for the married couple’s return, others were left in tears over Phil and Holly’s reunion.

The pair, who are said to be best friends both at and outside of work, shared an emotional hug.

Back on the blue sofa together, they hugged with plastic wrap around each of them.

Known as a “cuddle curtain” it allows you to hug by placing your arms through a plastic shield.

As they adhered to COVID-19 guidelines, some viewers were driven to tears by their unusual embrace.

One user tweeted: “Phil and Holly hugging. We needed that as much as they did.”

Another user shared: “Why am I feeling quite emotional looking at Phil and Holly hugging with the #CuddleCurtain?”

And a third viewer tweeted: “Just watched @Schofe and @hollywills cuddling for the first time and now crying.

“So emotional, loved the cuddle curtain.”