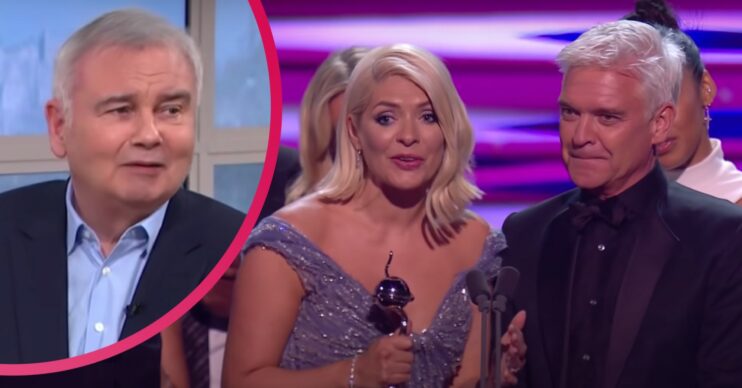 Did he fancy getting a few words in?

Eamonn Holmes has hinted on Twitter he may have wished to say a few words after This Morning‘s NTAs triumph.

The ITV series took home the Daytime gong on Thursday night and several of the show’s presenters assembled on stage to accept the award.

A speech of thanks was led by Philip Schofield and followed up with words from Holly Willoughby.

But some of Eamonn‘s fans reckon he – and wife and co-host Ruth Langsford – should have been allowed a few moments to speak, too.

And going by Eamonn’s Twitter activity, he may just agree with them.

It has been speculated before now that Eamonn and Phillip may not exactly be best buddies.

However, as the This Morning contingent got to their feet to accept the award, Phil was briefly seen giving Eamonn a warm clap on the shoulder.

Nonetheless, when it came to accepting the award, it was very much Phillip and Holly who were centre stage.

And some of Eamonn and Ruth’s biggest fans believe the Friday presenters should have enjoyed the limelight, too.

“Why do Eamonn Holmes or Ruth Langsdord never get to speak when This Morning wins an award?” one Twitter user pondered.

Retweeted over 50 times and ‘Liked’ nearly two thousand times, it appears the compliment was seen by Eamonn Holmes.

He also proceeded to give it a ‘Like’. However, it is not clear whether Eamonn was grateful for the support or held the same view.

I was waiting for Eamonn and Ruth to take the mic, it never happened.

However, he did also give his endorsement to another fervently supportive post.

And this Twitter post went as far to indicate they wouldn’t be backing the show again because Eamonn and Ruth didn’t get their moment.

People asking why @EamonnHolmes @RuthieeL didn’t talk at the #awards 🤔🤔🙄🤔🤔
That’s what I 😳 😐 was thinking 🤔 i was waiting for them to take the mic it never happened 😡
such a #shame that’s why i voted for @thismorning 🤨🤔🤨😐 i wont again 😤 pic.twitter.com/PPn8ypxknn

The fan wrote on Twitter: “People asking why Eamonn Holmes and Ruth Langsford didn’t talk at the awards. That’s what I was thinking.

“I was waiting for them to take the mic, it never happened.

“Such a shame – that’s why I voted for This Morning. I won’t again.”

Despite not being heard at the NTAs, Eamonn Holmes was still very much seen.

Twitter fans adored his ‘dapper’ look for the evening, with the 61-year-old decked out in a black suit that invited James Bond comparisons.

What did you think of Eamonn Holmes’ Twitter ‘likes’?  Leave us a comment on our Facebook page @EntertainmentDailyFix and let us know what you think of this story.