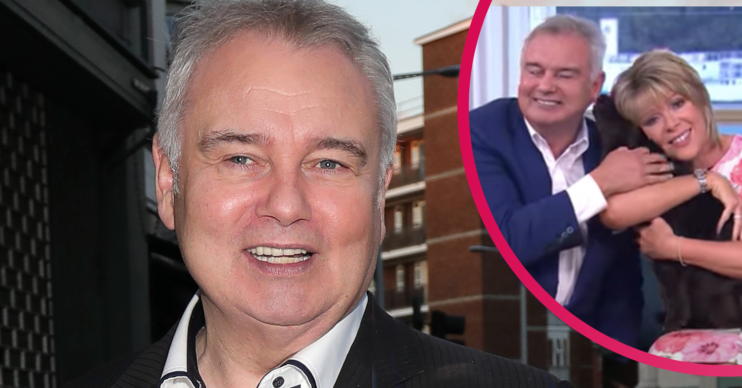 Eamonn Holmes says he wish he could feel as good as his dog makes him feel every day!

Eamonn Holmes has posted a poignant tribute to his rescue dog.

The This Morning presenter, 60, gushed over his sweet dog in honour of International Day of the Dog.

The host shared a sweet picture of himself cuddling with his pooch Maggie on an armchair.

“So today was International Day of The Dog.

“If only someone could invent a tablet to make me feel as good as my Dog makes me feel.

Michelle Keegan commented on his touching post with a heart emoji.

Eamonn cheekily replied: “She’s even lovelier than you!”

A fan posted: “Cracking photo – she is either very well behaved or you are a very patient man.”

Eamonn responded: “A bit of both” with a thumbs up sign.

So today was International Day of The Dog. If only someone could invent a tablet to make me feel as good as my Dog makes me feel. It's been amazing knowing you Mags. x

And another fan praised: “They are amazing aren’t they, both my labs have helped me through tough times and I love the way they greet you when you get home as if you’ve been away for years!! Maggie is beautiful x.”

Eamonn and wife Ruth Langsford adopted Maggie around 10 years ago from the Dogs Trust.

He revealed earlier this year that they immediately fell in love with her – but almost didn’t get her.

He explained on his Instagram stories: “I think of how we adopted her, we rescued her from the Dog’s Trust… Our son Jack, who would have been eight, he so wanted a dog, so we went down to the Dog’s Trust and I see this beautiful little black doggie.

“And I thought, ‘That’s really nice,’ so I took some video and showed it to Ruth, and she said, ‘I’m not sure, we’ll have to go and see the dog.’

“So we went and the dog was gone. The dog was adopted, naturally enough.

“Then we went back again two weeks later and [as we were leaving] one of the handlers who came through the door had a little black dog on the lead.

“She jumped on our son Jack who fell to his knees and I said, ‘That looks like the dog I saw two weeks ago,’ and she said,

“‘Magdelene? She was adopted but then the lady who adopted her got a full-time job and couldn’t keep her.’

“Well, we weren’t leaving. We did all the papers, all the forms, and then a week later we got Maggie.”