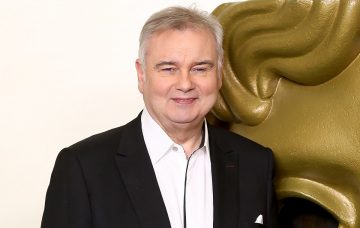 Eamonn Holmes issued health warning over his lack of sleep

Eamonn Holmes has been given a health warning after he revealed he only gets three hours of sleep a night.

In his new Channel 5 documentary series, How to Get a Good Night’s Sleep, with his wife Ruth Langsford, Eamonn discovered his lack of sleep could put him at greater risk of developing heart disease, diabetes and even dementia.

The new show will follow the couple – who both have early-morning starts as part of their jobs on TV – as they try to improve their sleeping patterns.

Eamonn revealed on the show that he only gets around three hours of kip a night on a regular basis.

He said: “I just can’t remember the last time I had a relaxing, restorative sleep.”

Eamonn, 57, visited consultant physician at Chelsea and Westminster Hospital Dr Suveer Singh, who told the presenter his lack of sleep could result in him developing a string of conditions.

Eamonn revealed that most days he needs a nap around 2pm because he’s so exhausted.

A few years ago, Eamonn opened up about his sleep deprivation during an interview with The Sun.

He’s used to having early-morning starts due to working on GMTV, Sky News Sunrise and now working on This Morning.

Eamonn said at the time: “Every year I get a health check-up and the doctor says I’m OK, but I think sleep deprivation is a very bad thing.

If you want to stop ruining your partner’s sleep with your snoring, you might want to think about putting down that wine glass… 😲 #HowToGetAGoodNightsSleep pic.twitter.com/hV8FvuCBUi

“I’m good at it but I’m sure it will kill me at some point. I’m up at 4am and I do my job, then fit in lots of other things – sometimes I’m not home until 9pm.”

Meanwhile, at the weekend, Eamonn and Ruth shared preview clips of their upcoming two-part series on social media.

Eamonn revealed that the documentary series will be examining the available therapy for sleeping troubles.

Eamonn wrote on Twitter: “Do you struggle to have a peaceful nights sleep? Join @RuthieeL and I for the first of a two part documentary series where we set out to cure our respective sleeping disorders.”

Do you struggle to have a peaceful nights sleep? 💤 Join @RuthieeL and I for the first of a two part documentary series where we set out to cure our respective sleeping disorders.
How to Get a Good Nights Sleep – 9PM Wednesday on @channel5_tv pic.twitter.com/Gxzr1Dh4xz

In the trailer, Eamonn admits: “Sleep and me do not come easily together,” as Ruth sleeps peacefully while snoring in their bedroom.

On Tuesday, Ruth shared a clip to Twitter showing herself trying out mouth exercises, which help reduce snoring.

Did you know there are exercises to help you stop snoring? Neither did I!
Join me and @EamonnHolmes for the first of a two part documentary series where we set out to cure our respective sleeping disorders. How to Get A Good Night’s Sleep tomorrow night at 9.00 on @Channel5_tv pic.twitter.com/iFE3qvfS2e

She wrote: “Did you know there are exercises to help you stop snoring? Neither did I!”

How to Get a Good Nights Sleep will air on Wednesday at 9pm, on Channel 5.

Will you be watching Ruth and Eamonn’s new series? Leave us a comment on our Facebook page @EntertainmentDailyFix and let us know what you think!