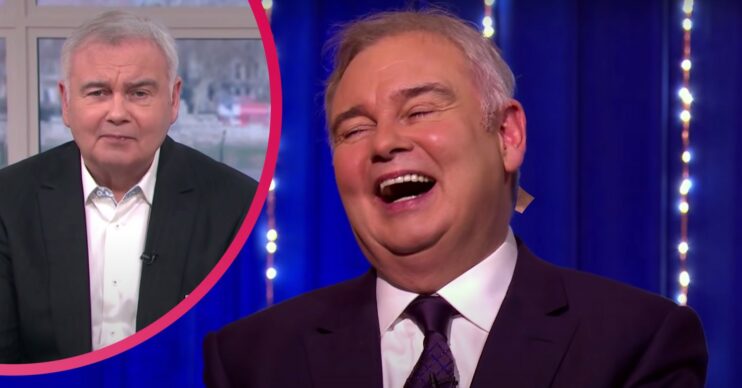 Eamonn Holmes has tickled his fans on Instagram after sharing new images of his baby granddaughter.

The former This Morning host, 62, delighted celebrity followers and fans with his social media updates about little Emilia.

But Eamonn also amused supporters by joking the tot wasn’t all that fond of him until he won her over.

Yesterday (Friday March 11) Eamonn shared a snap on Insta showing him comforting Emilia as she cried.

And this morning (Saturday March 12), the GB News anchor uploaded another pic showing her much calmer as he gazed into his granddaughter’s eyes.

Fans across both social media platforms adored the photos, with many leaving laughing emojis to illustrate their chuckling at Eamonn’s tease that Emilia isn’t his biggest fan.

He joked in the caption of the first upload, adding rolling eyes and smiling emojis to his words: “Just been to see Emilia my grandchild. That child adores me!”

I think she loves me now.

And in the second upload, Eamonn added: “It took a while… but I think she loves me now.”

How fans and followers reacted

Homes Under the Hammer host Lucy Alexander declared the first pic “the funniest ever” in the comments section.

Eamonn responded cheerfully with a laughing emoji: “Mortified! Reminds me of you when you see me.”

And in response to one follower asking why Emilia was tearful, Eamonn replied with more laughing emojis: “Me!”

The second image also melted hearts and charmed observers as Eamonn linked his previous post to the follow-up image.

But as well as thousands of likes left on the post, commenters made it clear they were also very taken by the gaze between Eamonn and Emilia.

TV presenter Amanda Lamb wrote: “I’m not crying, you are! Jeez that’s such a beautiful photo… look at the love.”

Eamonn replied to her: “Well if you look at the previous pic post you could have fooled me!

“Thank you for seeing that love Amanda. I think in the present world a lot of people have a lot of love to give. I think we need to feel it around us to make us feel better.”

Katherine Jenkins was also among the famous faces to remark on the pic, writing: “What a gorgeous pic.”

And in a comment echoed many times over, someone else wrote: “Melts my heart.”