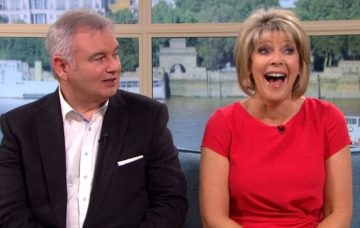 Eamonn Holmes left poor Ruth Langsford gasping on Friday’s This Morning after making a cheeky comment about the size of her knickers.

It happened after a segment about de-cluttering, which saw a viewer’s home given a streamlined makeover.

Ruth, 58, had said: “What a transformation! It’s the hardest thing, isn’t it? You know when you’ve tidied and you say you’ll never let it get in that state again. And then two months later…”

That led cheeky Eamonn, also 58, to make what appeared to be a rather random remark.

He told Ruth: “You must have more knickers than anybody on the planet.”

A shocked Ruth responded: “Thank you for sharing that!”

But Eamonn went on to explain the comment wasn’t as random as it seemed, saying: “All you ever say when I ask what you’re doing is say you’re clearing out your knicker drawer. How many knickers?”

Ruth told Eamonn she doesn’t actually have that many knickers, and he’s misunderstood her.

Cheeky Eamonn then quipped: “I did worry. And there’s not many of those you can get in the wastepaper bin. Honestly, about three would fill it, that would be it.”

There was laughter throughout the studio in response to Eamonn’s naughty remark, while Ruth replied: “Poor Eamonn, so cruel to his wife!”

And speaking of the bin, Eamonn also quizzed Ruth on something he found in there on Friday.

“Today, when I left, there was a brassiere in the waste paper bin,” he said.

Ruth explained: “It was an awful bra. I threw it away. I had it on yesterday and thought, ‘Why did I buy this? It’s a terrible shape and the seam is in the wrong place.’ I thought, ‘Don’t put it back, chuck it.'”

Eamonn said: “Well, it was a big shock to me when I looked in the water paper bin and thought, ‘Who has been in here?!'”

Ruth then changed the subject by teasing her husband over his choice of language, laughing: “Who says brassiere anymore? Apart from The Queen.”

Do you know anyone who uses the word brassiere? Are you a fan of tidying? Leave us a comment on our Facebook page @EntertainmentDailyFix and let us know what you think!