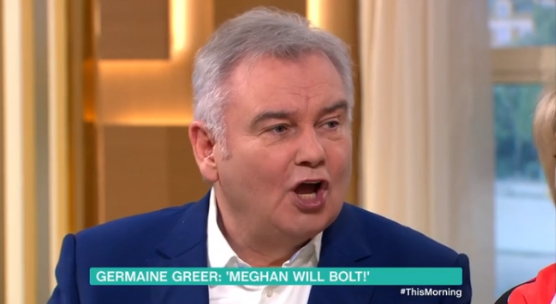 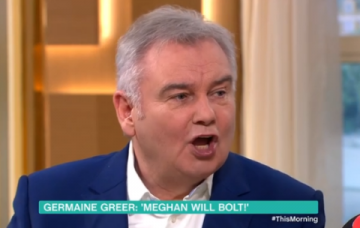 He didn't appreciate their comments on Meghan Markle

As the nation gears up to celebrate the wedding of Prince Harry to Meghan Markle, there’s one woman who isn’t buying into their fairytale romance.

Feminist writer Germaine Greer appeared on today’s This Morning to say she thinks the marriage is doomed as Meghan won’t enjoy life “in The Firm” and at 36, may have left it too late to have children.

She predicted that the Suits actress will leave Harry in the next five years.

“I don’t think she will bolt before the wedding, I think they have her feet nailed to the floor. But most of the royal spouses bolt eventually if you think of the track record,” she told Eamonn Holmes and his wife Ruth Langsford.

Her comments led presenter Eamonn Holmes to ask her why she was being “such a wicked witch”.

The 79-year-old Australian justified her view, saying Meghan has had to give up her acting job, charitable causes and “cosmopolitan” life in Toronto to become Harry’s wife.

While Ruth pointed out this proves her love for the prince, who she will marry on 19 May, Germaine replied: “The more you give up for love, the more pressure you put on the love.”

She went on to slate Meghan’s style, saying a hat she wore to a church service in Sandringham looked like a “cow turd” and the cream coat she wore for her engagement shoot was “two sizes too big”.

“Who is her stylist?” she asked.

Eamonn then stepped in to ask just why Germaine was being so negative.

Read more: Why Meghan Markle won’t have a maid of honour

He told her: “The nation at home don’t want to listen to this, they want to buy into the romance. The couple do seem to be very much in love and it’s a fairytale. Why are you being the wicked witch in all of this?”

Viewers agreed and tweeted to slam Germaine for being so mean.

“This bitter old witch Germaine Greer on @thismorning needs to stop putting her evil eye on Harry and Meghan!” wrote one.

“Germaine Greer you are one nasty witch. #ThisMorning,” said another. 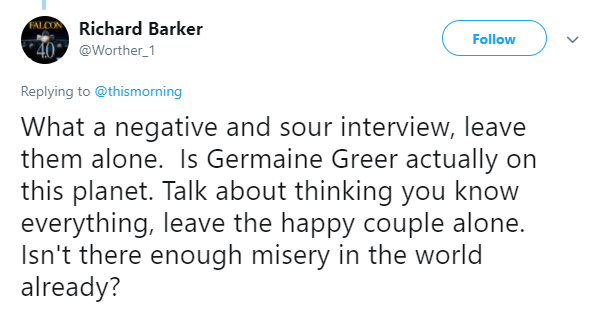 “What a negative and sour interview, leave them alone. Is Germaine Greer actually on this planet. Talk about thinking you know everything, leave the happy couple alone. Isn’t there enough misery in the world already?” said a third.

“I don’t want to be the wicked witch,” Germaine said on the ITV show.

“If I am saying she’ll bolt, it’s really that I mean I hope she’ll bolt before her possibility of a life is completely eradicated by this dreariness of The Firm.”

Do you agree with Germaine’s comments about Meghan? Or was Eamonn right to label her a “wicked witch”? Leave us a comment on our Facebook page @EntertainmentDailyFix and let us know what you think!