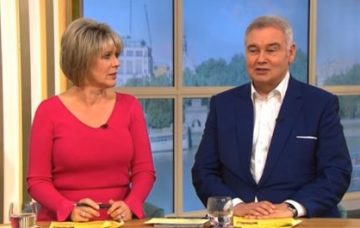 Eamonn Holmes barred from breakfast in Vegas over photo ID

He couldn't produce photographic ID so no breakfast for him...

Eamonn Holmes has grumbled over being refused breakfast while filming a new TV project in Las Vegas.

The Northern Irish presenter and wife Ruth Langsford were over in Sin City working on a new episode of Channel 5’s How The Other Half Lives.

But poor old Eamonn, 58, joked he was left “fading away” after being unable to access breakfast.

Well, it’s because he didn’t have a photographic ID with him… (not sure where his passport was?!)

He revealed on Friday’s episode of This Morning: “When I tried to have breakfast I had to produce a photographic ID. Imagine. Me! Having to ask me, ‘who are you?’ I was able to show ID but not photographic ID so I couldn’t have my breakfast.

Clearly it really irked him as Ruth pointed out: “You’ve told me about 25 times.”

Eamonn, who didn’t say whether it had been a hotel or restaurant breakfast, replied: “I’m sharing this with the public at home.”

Eamonn responded: “I find it amazing. It’s made me forget my whole point of [what I was about to say]!”

Meanwhile, Ruth spoke about her own experience of dining in Las Vegas, saying she couldn’t get over how generous the portion sizes were.

“I ordered spaghetti and meatballs one day when we stopped for lunch with the crew,” she said.]

“When it came, I thought that obviously three other people had ordered this. It came with what looked like a serving spoon so I thought I’d be helping other people.

“No! It was just for me! And the spoon was like a ladle.”

Eamonn said the pair were feeling a bit jet-lagged after flying back to the UK for hosting duties on This Morning.

They shared a couple of snaps from there travels, including one showing them striking a pose in front of the city’s famous fountains.

The King 👑 is back from Vegas. Business as usual tomorrow on @thismorning from 10:30am, and @talkradiouk from 4:00PM #elvis #elvispresley #lasvegas #vegas #howtheotherhalflives #theking

One fan said: “Love it! Do you even know how much you suit this?!!”

Don’t miss out: Three steps to ensure you see all ED!’s latest news on Facebook3

Another told him: “Looking forward to it Eamonn! I hope you and Ruth enjoyed your trip. (Or should we call you Elvis now?)”

And a third said: “LOL love this picture!”

How The Other Half Live is a Channel 5 series exploring how the super-rich live, taking viewers inside multi-million pound mansions, showing off the super cars, jewellery and lavish lifestyles.

Have you ever been asked for photographic ID at a restaurant? Leave us a comment on our Facebook page @EntertainmentDailyFix and let us know!