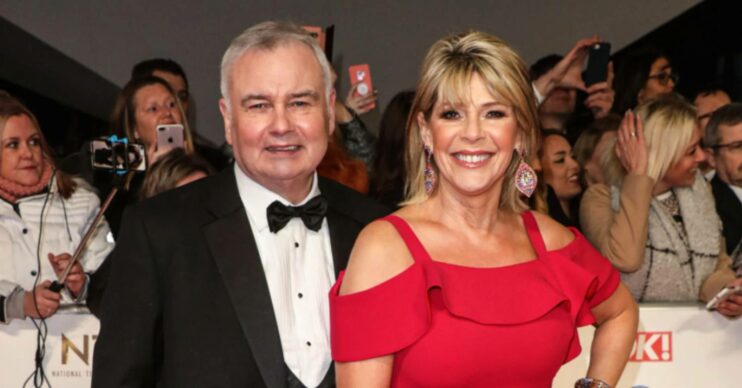 Former This Morning host Eamonn Holmes has revealed that his agonising back problems have put a strain on his marriage with Ruth Langsford.

Eamonn has been suffering with a trapped sciatic nerve and is on a mix of strong painkillers and intensive physiotherapy to tackle it.

But the 62-year-old has been left ‘wobbling’ around with a walking stick, and wife Ruth has been waiting on him.

Despite intensive physiotherapy and strong painkillers, the 62-year-old screen favourite says his daily challenges are impacting on his wife Ruth Langsford, who has to wait on him.

“For months now I haven’t been able to walk, sometimes at all, and it has really taken its toll on everyone around me too,” he told The Sun.

“I can’t bend down to pick things up so Ruth ends up having to wait on me, and I know my sons particularly are a bit embarrassed by the way I move around.

“Even my own family are bored of my moaning. It has caused some strain and Ruth is fed up of hearing about it and of me saying I can’t walk the dog or tidy up, but I can’t help it. It’s agony.”

It’s sad news for one of TV’s favourite TV couples – hopefully Eamonn will get better in 2022 and Ruth gets a break from picking up after him!

He posted the photo on Instagram along with the caption: “Pappa and Dec agree Emilia is the best thing we found under the Tree.”

The shot was shared on Boxing Day and shows Eamonn and Declan beaming with joy as they hold Emilia between them in her carseat.

While his followers flocked to compliment him on his family, it didn’t go unnoticed that Declan is very much Eamonn’s ‘mini-me’.

“Shes beautiful and your son looks like you Eamonn,” one fan gushed.

“Your son is your double, have a lovely Boxing Day Eamonn,” agreed another.

A third said: “Emilia is gorgeous and Dec looks just like you!”

The tot was born in July and Eamonn was equally smitten with the little girl back then, proudly posting a photo of Declan holding her.

Eamonn captioned the image: “My First born Son Declan with his first born and my first Grandchild Emilia.

“Welcome to The World Emilia.”

He also revealed the nickname he’d like Emilia to call him in future.

2022 is looking to be a busy one for Eamonn as he starts his new role with GB News.

Earlier this month, Eamonn posted a statement on Twitter about his new job after quitting as host of This Morning.

He said: “I’ve spent my career on broadcasting firsts and start-ups, and GB News is one of the most exciting yet.

He added: “I’ve admired GB News from the beginning for its clever mix of punchy debate but delivered with warmth and even some fun.

“To me the greatest honour in journalism is to give a voice and respect to the unheard, and that’s exactly what GB News is all about.”

Eamonn and wife Ruth Langsford were This Morning’s Friday presenters for over 14 years. Dermot O’Leary and Alison Hammond took over at the start of this year.

Eammon announced that Declan’s wife, Jenny, was expecting on This Morning back in April.