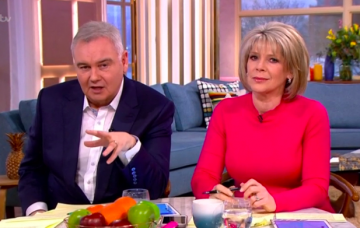 Eamonn and Ruth have on-air argument during This Morning

These two love teasing each other

When you have a husband and wife presenting team, the odd on-air-argument is bound to happen.

But who knew Ruth Langsford and Eamonn Holmes would have such a strongly-worded fight over a fireplace?

On Friday’s This Morning, the pair – who have been married nearly eight years and have one son, Jack – started rowing on air over the fake fire roaring away on the screen behind them.

The disagreement began when Eamonn, 58, mocked the video of a ‘fire’ beside them on the TV screen.

“Is that warm enough for you?” he asked sarcastically.

Ruth replied: “That makes you feel cosy just looking at it, doesn’t it?”

Eamonn seemed annoyed saying: “You say that but I have that at home and you say it’s ridiculous.”

She argued: “Yes, because we have a fire, so we don’t need both!

“You put the fire on and have it on the telly too.”

Eamonn, raised his voice as he told her: “See, you’re so hypocritical, you come on TV and say that’s wonderful.”

They talked over each other, as Eamonn said he prefers to turn the fire off and leave the TV on.

He disagreed, saying: “Well, it’s not, because it saves money.”

They fell out AGAIN later in the show, when Eamonn told viewers his pet name for Ruth.

“She’s my little chicken dumpling,” he said, as an outraged-looking Ruth insisted: “He does not call me that.”

Eamonn argued: “Yes I do! You come home and say, ‘Am I your little chicken dumpling?’ And I say, ‘Yes, my little turkey neck’.”

Ruth rolled her eyes and said: “He actually calls me a witch.”

Read more: Gemma Collins reveals on Loose Women that Arg is back on the scene!

They seemed to be pals again later in the show, as they got the giggles over “pizzly bears”.

After a chat about polar bears, Eamonn told Ruth about a hybrid bear called “pizzlies”.

Ruth couldn’t stop laughing as she accused him: “I think you’re making that up!”

Her husband tried to convince her, insisting that wildlife legend, Sir David Attenborough had personally told him about the merged creature, which is made from a grizzly bear and a polar bear mating.

But Ruth told him: “I’ll be laughed out of town.”

Eamonn put the show’s researchers on it and towards the end of the episode, he was able to show his Loose Women wife a picture of the hybrid animal.

Do you love their on-air spats? Leave us a comment on our Facebook page @EntertainmentDailyFix and let us know what you think!