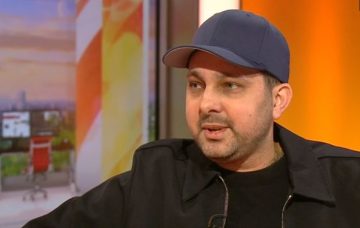 Magician Dynamo has spoken about the effects of his ongoing health battle and how it has impacted his ability to perform tricks.

The performer recently revealed he has been suffering for the last eight months, after being hospitalised due to a bout of food poisoning combined with his Crohn’s disease, a chronic inflammatory bowel condition.

As well as affecting his appearance, it’s left the star with arthritis in his hands.

Dynamo told BBC Breakfast on Wednesday: “It’s definitely had quite a toll on my body. I’ve put on two stone, which is quite strange. That’s a side effect of all the medicine.

Read more: Lorraine Kelly enjoys a rare night out with her daughter Rosie

“I’ve put on a lot of weight, also one of the main impacts for me is it’s given me arthritis, which, for a magician, not being able to use my hands as I normally would…

“I’m working with a physio and doctors to find a way to get the right medication and the right treatment, so I can hopefully come back on stage and show you some new magic.

“I’m always working on new ideas and I’ve got many ways to do my tricks, and some of them don’t need as much dexterity, I use my mind, which is still intact.”

Dynamo added that he has shows planned for later this year and is working towards getting better for them, saying he has missed being on stage.

He revealed his health battle in a candid video posted to social media in March.

“The response has been amazing,” he said. “I didn’t expect that at all. It’s good it has inspired other people with similar conditions to speak out and bring more attention to it.”

He revealed the health battle has allowed him to commit more time to charity work, and he recently visited a Syrian refugee camp in Lebanon.

Dynamo  described how he is working with a charity to get half a million Syrian refugee children into education, and that he is keen to focus on helping others rather than his own problems.

Thank you for all the kind support. Here's a little update on the situation. #roadtorecovery #iwillbeback pic.twitter.com/Qlh45ycKbw

“Being out there, it really put into perspective what Syrian children and what Syrian families (are) having to go through. It makes my illness feel like nothing in comparison, and it kind of helped put it in perspective for me and focus on doing something for the greater good.”

He said that he has “taken a lot of this time to re-evaluate my approach to magic and also to certain elements of life in general”.

Dynamo, real name Steven Frayne, said that he has been working with global children’s charity Theirworld.

He added: “My main focus by the end of the year is to get half a million Syrian refugee children into school because they’re not being educated, and that’s something that needs to be addressed.”