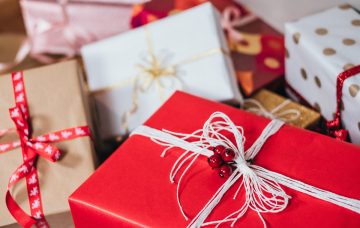 A family were stunned to receive a sack of Christmas presents their late neighbour had left for their daughter – for the next 14 years.

The presents were brought round to the home of Owen and Caroline Williams in Barry, Vale of Glamorgan, by the daughter of their neighbour, Ken Watson, following his death.

Mr Williams said the presents would have taken Mr Watson “up to our little girl’s 16th Christmas” – as daughter Cadi is now aged two.

“His daughter popped round a few moments ago clutching a large plastic sack. In the sack were all the Christmas presents he’d bought for our daughter..

“He always told us he’d live till he was 100-years-old, so these gifts would have taken him up to our little girl’s 16th Christmas.”

Mr Williams asked followers to vote on whether he and his wife should open all of the presents now or have a “lucky dip till 2032”.

He wrote: “My wife and I think it might make a nice Christmas tradition to give our daughter ‘a present from Ken’ for the next 14 years.

“Issue is, we really have to open them now. Nobody wants to give a fifteen-year-old Duplo!”

The overwhelming response was that the couple should wait and give Cadi a gift every year until her 16th Christmas.

Mr Williams said his neighbour had careers including as a salvage diver and baker.

“The first time I met him, he was bouncing a 20ft ladder across the face of his house. He was on top. He was 83 at the time,” he wrote.

“He played the accordion. We’d hear the strains of oompah drift through the kitchen wall late at night.”

He linked to an article by the Barry and District News from November 2016, which described how Mr Watson had taken up hobbies such as sky diving and wing walking to combat loneliness.

Mr Williams added: “He planned to do this again.”

The couple opened one of the presents for Cadi, a copy of Christmas Eve at the Mellops by Tomi Ungerer.