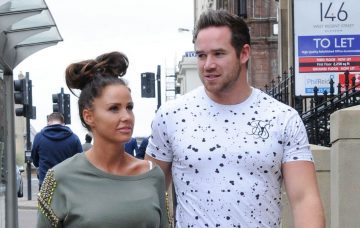 Neither Katie nor Kieran has commented on the allegations

According to The Sun, the couple have apparently “accepted” their marriage is over, but Kieran will remain in the family house with the kids for now.

A source alleged: “There have been loads of trials and tribulations but it’s finally over.

“They’ve both accepted it and are ending the marriage, but Kieran is still in the house for now. He’s great with the kids and has almost become a live-in nanny.”

The insider went on to allege that Kieran suspects Katie may be dipping her toe back into the dating world, adding: “Either way, he knows there is no going back.”

Katie and Kieran married in the Bahamas in January 2013 following a whirlwind romance and share two children: Jett, four, and Bunny, three.

But it hasn’t all been smooth sailing for the couple.

In 2014, Katie publicly accused Kieran of having an affair with her best friend while she was pregnant. She initially vowed to divorce him before doing a U-Turn and giving him a second chance.

But then last summer, she again accused Kieran of being unfaithful, alleging that he’d slept with their kids’ nanny behind her back.

Kieran has continued to live at the family home, however, which led many fans to wonder if Katie had taken him back again and the marriage was continuing.

In an interview with OK! magazine last month, Katie ranted she was “sick to death of having to justify myself” amid ongoing speculation about the state of her marriage.

She added: “Me and Kieran know what’s going on and it is what it is. I think people just want me to get a lorry and chuck him out of the house. Yeah, it hasn’t been good, but what do you do? I’ve told him he needs to go and sort himself out and get help.

“I have knee-jerked before in relationships and there are the kids to think about.”

The star is also mum to sons Harvey, 15, and Junior, 12, and daughter Princess, ten, from her previous relationships.

Katie and Kieran, meanwhile, haven’t commented on The Sun’s claims on social media, so there’s no word yet on whether it’s accurate…

We’ll perhaps get the full story on Katie’s upcoming reality show, My Crazy Life, which is filming a second season for Quest Red right now.

Katie has promised fans the inside scoop on her marriage, as well as delving into her fight to make online trolling a criminal offence, her beloved mum Amy’s diagnosis with a terminal lung condition, and general life in the Price house.

She recently said: “There’s always drama in the Pricey household and I think this year might well be the craziest yet so I had to do another series of My Crazy Life with Quest Red!