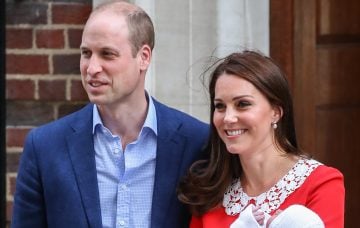 Louis will be christened at The Chapel Royal, St James' Palace on Monday

The Duke and Duchess of Cambridge have chosen six godparents for their son Prince Louis.

William and Kate announced the names of Louis’ godparents on Monday morning, just hours before his christening at The Chapel Royal, St. James’ Palace.

Five are close friends, while one is a family member.

He has not been seen in public since William and Kate left the hospital with him, so excitement is building among royal fans, eager to catch a new glimpse of the little one at Monday’s christening.

The guest list for the christening has been kept very small, with just close family and friends attending.

The Queen and Duke of Edinburgh will not attend the christening.

The only senior members of the royal family in attendance will be The Prince of Wales and The Duchess of Cornwall, and the Duke and Duchess of Sussex.

Kate’s parents, Michael and Carole Middleton, will be present, alongside her sister Pippa and husband James Matthews, and brother James.

All of Louis’ godparents and their spouses will be there.

Prince Louis will wear the handmade replica of the Royal Christening Robe, made by The Queen’s dressmaker, Angela Kelly.

Water from the River Jordan will be used during the baptism at The Lily Font.

The Duke and Duchess of Cambridge will host a private tea party at Clarence House following the christening, where guests will be treated to christening cake made from a tier of the couple’s wedding cake.