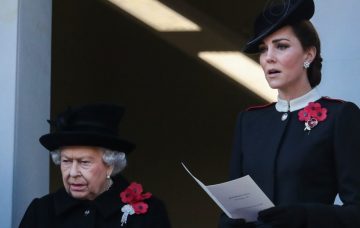 Buckingham Palace has shared a sweet video of The Queen’s most memorable moments from the past year as 2019 approaches.

In the clip, a stunning photo of the new Duchess of Sussex is included showing Meghan and Her Majesty during an outing in Cheshire back in June.

Other images of Meghan are featured, including an official photo of Meghan and Prince Harry on their wedding day. Watch the video here.

However, while Meghan featured in more than one snap in the clip, her sister-in-law Kate only appeared in one pic  – which was Harry and Meghan’s wedding picture.

The post was captioned: “As we say goodbye to 2018 here’s a look at some of the most memorable moments of the year from The Queen’s engagements. Happy New Year!”

Fans loved the minute-long video with one person commenting: “Love the compilation of photos, they are wonderful. 2018 certainly has been a big year with many fabulous moments & happy memories.”

Another wrote: “What a memorable year. Happy new year Your Majesty, Happy New year to all the Royal Family also.”

Meanwhile, others pointed out that Kate and husband Prince William didn’t feature in many photos.

One person tweeted: “I did not see William or Kate much.”

It comes after Meghan and Kate have been dogged by rumours they haven’t been getting on in recent months.

Reports suggested that Kate was upset by Meghan’s demanding manner over Charlotte’s bridesmaid dress this spring.

There have also been suggestions that there is tension between their husbands, with claims the older sibling warned the younger ahead of his wedding to proceed with caution, as they didn’t know much about Meghan.

However, Kate and Meghan put on an united front as they attended the Christmas Day service at St Mary Magdalene on the Sandringham estate, Norfolk, where they are all guests of the Queen this festive season.

Next year is going to be an exciting time for the royals as Meghan and Harry will welcome their first child together.

The couple announced in October that they were expecting and last month it revealed they are moving out of Kensington Palace into a 10-bedroom Frogmore Cottage on the grounds of Windsor Castle next year before their first child is born.

Kensington Palace said in a statement: “The Duke and Duchess of Sussex will more to Frogmore Cottage on the Windsor Estate early next year as they prepare for the arrival of their first child.

What is your favourite memory of the royal family over the last year? Leave us a comment on our Facebook page @EntertainmentDailyFix and let us know!