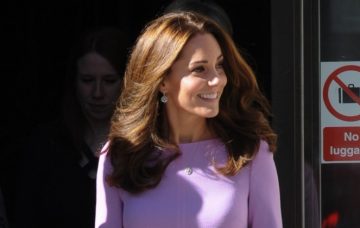 The Duchess of Cambridge wore one of Princess Diana’s favourite tiaras as she attended a glitzy state banquet at Buckingham Palace.

The mother of three, 36, cut an elegant figure as she arrived alongside her husband, The Duke of Cambridge, for the lavish affair on Tuesday evening.

It was held in honour of the King of the Netherlands, Willem-Alexander, and his wife, Queen Maxima, who are currently on a state visit to the UK.

Read more: Pregnant Duchess of Sussex rushed out of Fiji engagement by security

Her blue gown was by Alexander McQueen, one of her favourite brands to wear.

The Queen inherited the tiara – a replica of an earlier version – following Queen Mary’s death in 1953, and it quickly became a favourite of Princess Diana’s when The Queen loaned it to her.

Kate has worn the tiara on a handful of occasions since joining the Royal Family. Her pearl drop earrings belonged to Diana, while her necklace was Queen Alexandra’s wedding necklace.

She wore a Royal Family Order below her left shoulder, a personal gift from The Queen to female members of the Royal Family.

Meanwhile, on the other side of the world, The Duke and Duchess of Sussex are continuing their 16-day tour across Australia, Fiji, Tonga and New Zealand.

They had a busy day of engagements in Fiji’s capital of Suva on Wednesday, which included two solo engagements for Meghan, who is pregnant with the couple’s first child.

However, her visit to a local market was abruptly cut short due to concerns over crowd sizes, and she was whisked away by security just six minutes into the engagement.

A palace aide told the Telegraph: “It was hot, humid and uncomfortably busy and there were far larger crowds than expected. She met everyone she was meant to meet and left.”

Meghan continued on to her second solo engagement of the day, tea at the British High Commissioner’s House, while Harry visited the Colo-i-Suva forest, which is part of the Queen’s Commonwealth Canopy.

Other engagements on Wednesday including Harry going solo to lay a wreath at the Fiji War Memorial before he and Meghan visited the University of the South Pacific campus in Suva, where they both gave speeches.