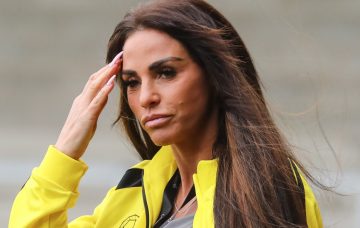 Katie Price has set her fans’ tongues wagging after implying her estranged husband Kieran Hayler has moved out of her family home in a recent Instagram post.

As the former glamour model celebrated her eldest son Harvey’s 16th birthday over the weekend, she shared an image of a frog cake that Kieran’s mum, Wendy, had made for Harvey.

In it, she thanked Kieran for “dropping it off,” suggesting he was no longer living with them.

Katie’s full caption alongside the cake snap read: “Thankyou @wendyhayler04 for Harvey’s birthday cake you made it’s amazing and thanks Kieran for dropping it off.”

While hundreds of her fans commented to wish Harvey a Happy Birthday, others wondered what Katie meant about Kieran.

“Wait… so Kieran moved out?” one asked.

“Is Kieran and her still together?” wondered another.

“Hopefully his father figure (Kieran) is included in the celebrations,” wrote a third, while a fourth said Katie thanking Kieran for “dropping off” was “savage”.

Katie’s relationship with her third husband has been strained since he was accused of cheating on her.

He had an affair with Katie’s best friend back in 2014, then last year Katie publicly accused him of being unfaithful again.

The pair had appeared to be seeing if they could work things out, with Katie telling OK! Magazine in April: “I’m sick to death of having to justify myself. People are always speculating about whether we’re together or not, and yes, he’s obviously in the house.”

But a friend of the pair recently told The Sun that Kieran had only been living with her recently as a “live-in nanny”.

He has children Jett and Bunny with Katie, who also had daughter Princess and son Junior with Peter Andre, and Harvey from a relationship with Dwight Yorke.

A close friend of the couple told The Sun of Kieran and Katie’s relationship: “There have been loads of trials and tribulations but it’s finally over.

“They’ve both accepted it and are ending the marriage, but Kieran is still in the house for now.

“He’s great with the kids and has almost become a live-in nanny.”

It’s unclear if Kieran, 31, attended Harvey’s party over the weekend, as he shared the same picture of the frog cake wishing the teen a Happy Birthday and thanking his mum for her baking, rather than any photos of the party.

His other posts on Instagram over the Bank Holiday weekend showed him spending time with Jett and Bunny.

Kieran’s absence from the party means Katie could have been throwing him some shade with another caption she wrote alongside a video of Harvey blowing out candles on his cake.

She wrote: “Thanks to everyone for Harvey’s birthday wishes. He really enjoyed his surprise birthday party with all of our close friends and family!”

In a further post, Katie wished her son a great day, saying, “nobody brings me happiness like you do,” as she shared a sweet black and white image of them together.

The speculation over Katie and Kieran’s relationship comes after she has been pictured out partying as she celebrated her own 40th birthday, and is reported to have started dating a personal trainer and one-time reality star, Kris Boyson.

Meanwhile, many of Katie’s other fans weren’t interested in her love life after she posted the cake picture as they were more distracted by a grammatical error!

The icing on the cake said “your my star,” and many pointed out it should in fact have said “you’re”.

Do you think Katie should move on from Kieran? Leave us a comment on our Facebook page @EntertainmentDailyFix and let us know what you think!