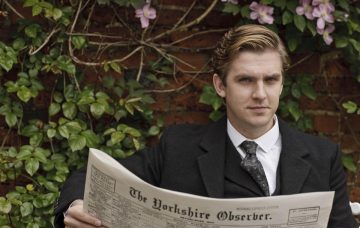 Downton Abbey SPOILER: Matthew to come back from the dead in new film?

Downton Abbey viewers were left devastated when the hero of the ITV show was killed off in a dramatic accident.

Heartbroken fans were left sobbing by the “untimely and tragic death” of character Matthew Crawley during the Christmas special in 2012.

In horrifying scenes, the popular character was involved in a car crash just moments after celebrating the birth of his first son.

Viewers complained it was a “travasty”, a “tragedy” and an “outrage”, with some saying the ending had “ruined their Christmas”.

Like many deaths on TV, fans refused to believe that the heir to Downton was really dead.

But could fans see Matthew return from the dead in the upcoming Downton Abbey film, due to be released in 2019?

Could the film channel the legendary scenes in Dallas, when Bobby Ewing made an emotional comeback one year after being killed off in a motoring accident?

Revealing that she’d loved being back in contact with her Downton Abbey castmates, she said: “It hadn’t been too long – we try to have a Downton Abbey reunion. But to be up there [filming] was great.”

Panelist Jane Moore, a self-confessed fan of the show, probed Phyllis about the possibility of Matthew making a surprise reappearance.

She replied: “Yes, he comes back as the ghost of Christmas past.”

However, she then added: “No, sadly he’s still dead.”

Fudge! We would have loved a ghostly edition of the period drama!

Jane also asked whether the film picks up from where the series ended, and was told: “We’ve gone on a couple of years but that’s all, not anymore.”

The actress also confirmed that most of the original cast were back filming.

Should Matthew have a mustache for the #DowntonAbbeyMovie…? Vote below… ☑️ ❎

The 36-year-old joked about his character making an appearance in the highly-anticipated Downton Abbey movie.

Alongside the reunion snap, he teased: “Should Matthew have a mustache for the #DowntonAbbeyMovie…? Vote below…”

Would you like to suspend belief and see Matthew back in Downton? Leave us a comment on our Facebook page @EntertainmentDailyFix and let us know what you think!