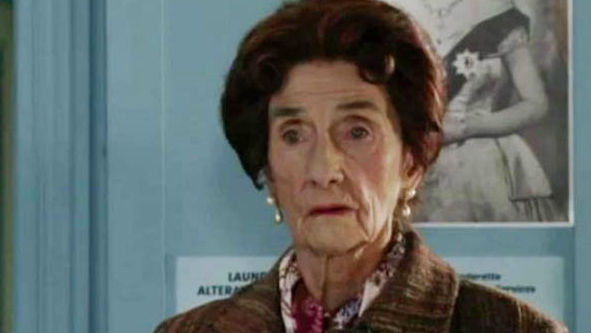 Do our eyes deceive us?

EastEnders viewers were delighted when Walford legend Dot Branning returned to the Square after spending a few months away visiting her granddaughter in Wales.

Dot came back to find her house left in a mess by Sonia and Robbie Fowler who have been staying there while she was away at the seaside.

After calling for her beloved cat Dave, she freaked out about the amount of fast food rubbish that had been left lying around.

Dot then found a flier about the reopening of the launderette which had been her place of work for years before she was fired for being too old.

The Walford matriarch – played by June Brown – was back in Walford to support the rest of the Branning family as they prepare to switch off Abi’s life support.

Abi has been in a coma and declared brain stem dead since her horror fall from the Queen Vic roof on Christmas Day.

In an emotional scene with Kush, Dot confessed to seeing ‘happy little girl’ Abi every time she closed her eyes.

But while Dot adjusted to a different Albert Square to the one she left, viewers were distracted by one unprecedented occurrence – Dot was wearing trousers rather than the skirts she usually favours.

“What’s happening? Dot is back and wearing trousers!!! What even is life anymore?!” asked one baffled viewer, while another added: “I’m fifteen minutes late starting #EastEnders tonight but I’ve just seen Dot wearing trousers. Has this EVER happened before?”

There was more confusion as fans noticed – yet Dot remained oblivious – that the door to her living room appeared to have changed sides.

One viewer wondered: ” Am i the only one who’s noticed Dot’s living room door and sofa has magically shifted around to the opposite side of the room?”

Another pointed out: “Is Dot’s frontroom door in the wrong place???”

EastEnders continue tomorrow at 7.30pm on BBC One