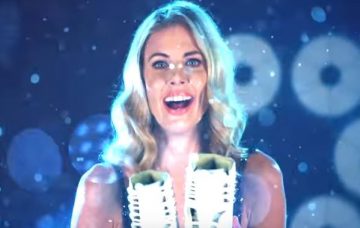 Move along, there's nothing to hear, here...

Never has a person’s changing accent caused as much interest as Donna Air’s. Well, apart perhaps from Geri Halliwell’s, but we’ll save that for another day.

Back in 2016, Donna was roundly mocked for her cut-glass tones on Celebrity MasterChef, with viewers taking to social media at the time to question why the former Byker Grove actress had suddenly gone all Made in Chelsea.

And now, as she appears on Dancing On Ice, people are asking the same thing – with some even claiming her native tones have returned in order to woo voters from the North East. Wey aye, man!

But in an interview with The Sun, Donna has hit out at accusations that she is wilfully putting on any accent – and says that her tones simply come down to where she is living.

Last week, a mole told the paper that Donna’s accent would change in a heartbeat – constantly alternating between Sloaney and Geordie.

“It’s very odd Donna would go from super-posh one minute to more like she was back on Byker Grove the next,” the source said.

However, in an interview ahead of this week’s DOI, Donna has hotly contested that her much-discussed diction is in any way forced, excusing away any irregularities as being down to simple geography…

“I was first accused of losing it 20 years ago. It’s a mix of my lives, which has been Newcastle and Knightsbridge,” she said. “I’m proud to be both. London has been my home for 25 years. Anybody with half a brain realises the reason I sound Chelsea is because I’ve lived here for so long.”

The mum-of-one was previously in a long term relationship with conservationist Damian Aspinall – who is the stepson of a baronet (Sir George Osborne) – and with whom she has a daughter, Freya, and her current on-off squeeze is none other than Kate Middleton’s little brother James…

She insists she has not forgotten her roots though, and is very fond of her North East twang.

“I love the Newcastle accent and I’m proud to be from there,” she told the Sun.

However, she does admit that she also adores the more up-market sloane-tone, and reveals that her offspring, Freya, is definitely more West End than Wallsend.

As do you, Donna, under whatever guise…