President Donald Trump has been criticised for appearing to fall asleep during the Buckingham Palace banquet last night.

Trump, who arrived in the UK on Monday for a three-day state visit, attended the banquet but seemed to nod off while the Queen gave a welcome speech just before they tucked in to eat.

In a clip circulating social media, the 72-year-old is seen with his eyes shut while sat between Her Majesty and Camilla, the Duchess of Cornwall.

The President of the United States, Donald Trump, falling asleep as Her Majesty The Queen delivers her State banquet speech...pic.twitter.com/EdXh15XMre

As the Queen spoke about the relationship the UK and America share, Trump can be seen repeatedly closing his eyes.

At one point, he had his eyes shut for almost 10 seconds before suddenly jolting up.

He falls asleep at one point in this. What an embarrassment.

Social media users were quick to share their thoughts, with many not impressed by the president's antics. 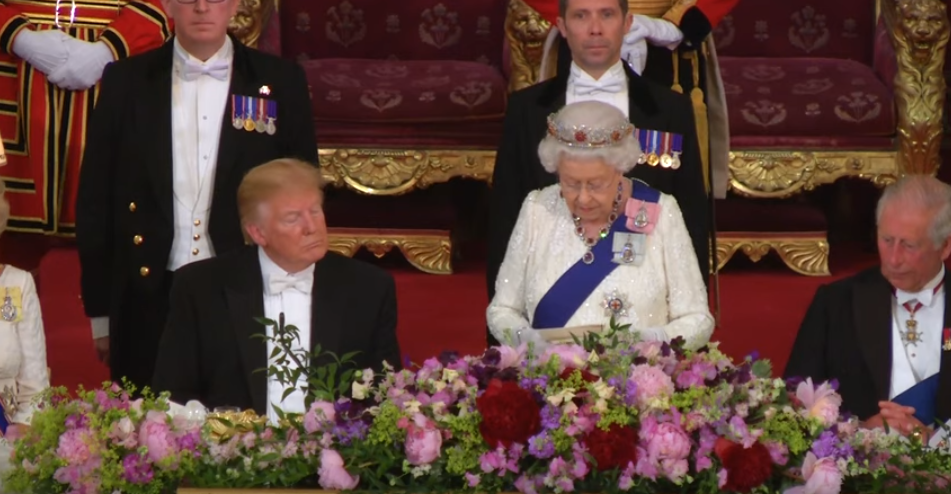 Another wrote: "Yes it was the man sat there falling asleep beside the Queen. What a disgrace, again Trump shows his ignorance."

A third added: "He falls asleep at one point in this. What an embarrassment. @realDonaldTrump."

Yes it was the man sat their falling a sleep beside the Queen . What a disgrace again trump shows his ignorance.\\\ #TrumpsAnInternationalDisgrace

He falls asleep at one point in this. What an embarrassment. @realDonaldTrump https://t.co/LKc1BOWGVt

You fell asleep during THE QUEEN'S speech! You are a total embarrassment to our country and the world!

The banquet was attended by 170 guests, including members of the royal family and Trump's family.

In her speech, the Queen said: "Mr President, I am delighted to welcome you and Mrs Trump to Buckingham Palace this evening, just twelve months after our first meeting at Windsor.

"Mr President, as we look to the future, I am confident that our common values and shared interests will continue to unite us.

"Tonight we celebrate an alliance that has helped to ensure the safety and prosperity of both our peoples for decades, and which I believe will endure for many years to come. Melania and Trump arrived in the UK on Monday (Credit: Splashnews.com)

"Ladies and Gentlemen, I invite you all to rise and drink a toast to President and Mrs Trump, to the continued friendship between our two nations, and to the health, prosperity and happiness of the people of the United States."

You can watch the Queen's full speech here.