Oops, he did it again

Calling your wife the wrong name is sure to throw a spanner in the works of any relationship.

So let’s hope Donald Trump, as the controversial President of the United States, is forgiven for his latest mishap by First Lady Melania, after he mistakenly called her ‘Melanie’ in a tweet.

The US leader must have been pulling his hair out (ahem) when he realised the mistake he’d made in his well-intentioned message on Twitter, and quickly amended it.

He was welcoming Melania home after she underwent treatment for a kidney condition.

The original message said: “Great to have our incredible First Lady Melanie back home in The White House. Melanie is feeling and doing very well. Thank you for all your prayers and best wishes.”

He later corrected the spelling of her name, but not before eagle-eyed media outlets and followers had spotted it and taken screen grabs and re-tweeted it.

He posted the same message on Instagram, and some followers asked about the earlier mis-spelling. One asked: “Is this the version where you misspelled her name?” 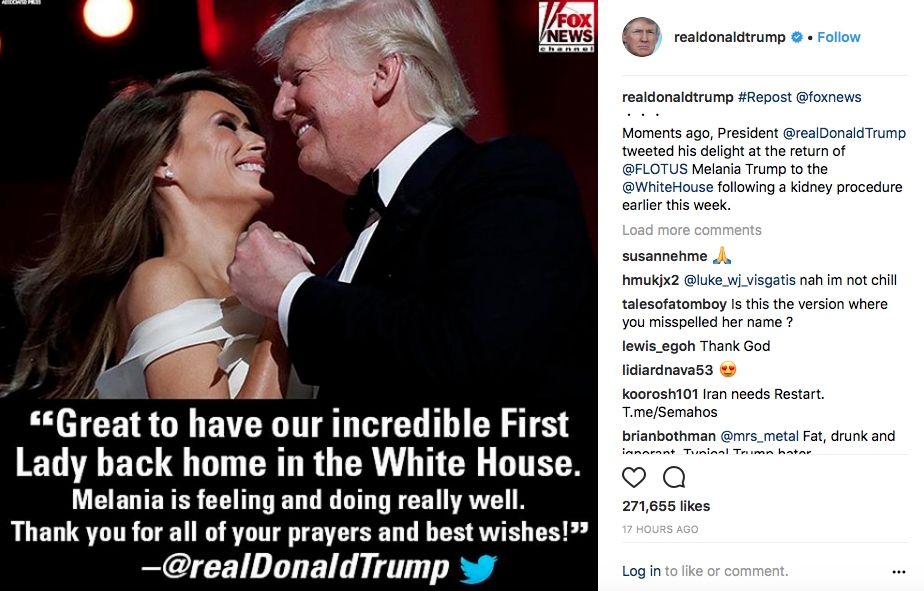 According to a White House statement Melania, 48, had an ’embolisation procedure to treat a benign kidney condition’ and returned home yesterday.

Her spokeswoman Stephanie Grisham said: “She is resting comfortably and remains in high spirits. Our office has received thousands of calls and emails wishing Mrs Trump well, and we thank everyone who has taken the time to reach out.”

Trump has been called-out before for misspelling on Twitter. He once posted ‘Don’t talk to me until I’ve had my morning covfefe,’ which led to a host of memes about what the word ‘covfefe’ could mean.