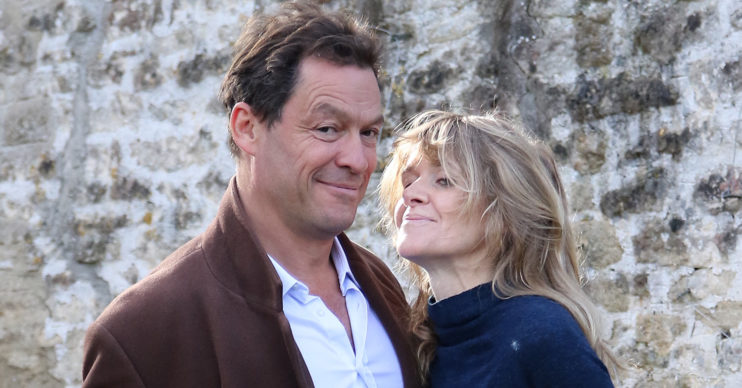 He has allegedly been unfaithful to his wife of ten years

Dominic West has been slammed for his ‘publicity stunt’ photos by a leading body expert.

The actor, 50, reunited with his wife Catherine Fitzgerald, 49, for a series of ‘loved up’ photos.

This comes after a newspaper published photos of Dominic allegedly kissing his co-star Lily James, 30.

The new snaps show Dominic and Catherine holding one another and smiling.

However, body expert Judi James says it all looks a bit too good to be true.

What happened to Dominic West?

Judi says that Dominic appears ‘arrogant’ and ‘smug’ in the photos.

Speaking to The Sun, she said: “The stunt looks led by wife Catherine who leads Dominic out of the house wearing a smug-looking, closed-lips winners smile and clutching their statement in one hand while a rather less keen-looking Dominic follows wearing a frown and with his hands stuffed in his pockets in what looks like a desire to avoid or hide.”

She says he has a classic ‘denial’ pose – which are apparently often very transparent to outsiders.

In many of the photos Catherine, who shares four children with Dominic, is staring earnestly up at Dominic.

However, he avoids direct eye contact with her in almost every shot.

Judi continues: “His one hand on his wife’s back does seem to hold her close but the very closed-mouth kiss does, naturally, appear rather awkward.

“Their side by side smiles are probably a very slightly more natural signal of unity with some mirroring between her teeth-baring grin and his rather more guarded beam.”

The couple appeared outside their Wiltshire cottage, said to be worth around £1.8 million.

Dominic and Catherine left a handwritten note outside their home.

Dominic is currently filming a new TV series adaption of the Nancy Mitford novel The Pursuit of Love.

He is playing the film’s patriarch Uncle Matthew.

They were then spotted sharing a scooter ride together.