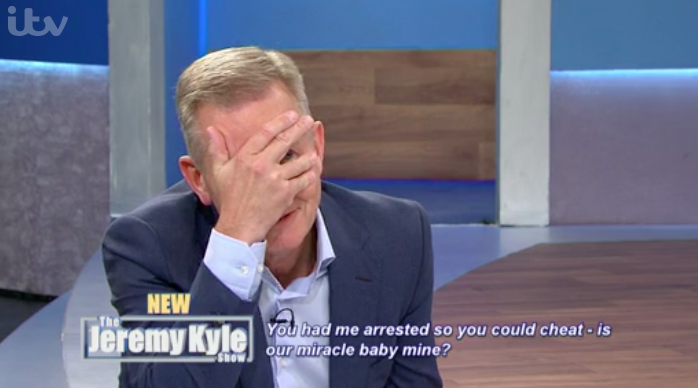 Shocking new reports allege that guests on The Jeremy Kyle Show were encouraged to take drugs and drink alcohol before they went onstage.

The controversial chatshow was axed by ITV after the tragic death of former guest Steve Dymond, who died days after appearing on the show.

The episode, due to air tonight (Monday 27 May), spoke to several high-level members of staff and former guests, who all claim that the show’s aftercare was non-existent.

Metro reports that an anonymous producer said: “Researchers and APs and sometimes producers would smoke weed with guests in the hotels the day before to keep them happy.

“If guests were becoming flaky they’d appease them in any way they could.”

The source went onto say: “There was a contributor who was a drug addict and had since stopped taking drugs and cleaned their act up.

“But in actual fact the show wanted them to be on drugs, because there was no ‘story’ without it.”

It’s alleged that another producer was asked to “get that person to take drugs again” and at one point was asked “leave money lying around on a table so they will take that money and go and buy drugs with it”.

The source continued: “The guests were treated like cattle.

“Behind the scenes they created a kind of maze. It’s so if the guests run off the stage it’s a controlled environment.

“The cameraman knows where to go. The guest won’t be able to find their way out because it all looks the same.”

It’s also alleged that booze was taken to guests backstage for “medicinal purposes” to keep alcoholics “topped up”.

The new allegations come after the show, a staple on daytime TV for 14 years, was taken off air earlier this month.

ITV said: “Given the gravity of recent events we have decided to end production of The Jeremy Kyle Show.

“The Jeremy Kyle Show has had a loyal audience and has been made by a dedicated production team for 14 years, but now is the right time for the show to end.”