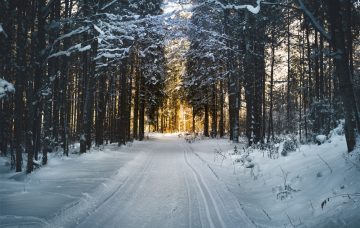 Parts of the UK were given cold weather alerts from Public Health England and the Met Office today after Britain was hit by the Icelandic chill overnight.

And the cold snap could wreak havoc on the NHS, with temperatures dipping to as low as -9C, as we warned yesterday.

It’s set to get even colder on Friday night through to Saturday.

Dr Nick Scriven, president of the Society for Acute Medicine, told the Guardian this chilly spell would put pressure on overstretched NHS services.

He said: “Influenza is here and is already impacting the NHS and, with colder weather starting to set in, this will further stress already stretched services.

“I and many colleagues across the country are anticipating mayhem this weekend as temperatures drop, but it will come as no surprise to us.”

A level two cold weather alert is in place for social and healthcare services in northern and western areas until midnight on Saturday with a severe health risk to vulnerable patients in these freezing conditions.

The very young, old and those with chronic diseases are most at risk as this prolonged episode of cold weather is called “dangerous” by experts.

A Met Office spokesman said: “It’ll be a dry, cold and often cloudy day with any freezing fog patches slow to clear.

“Isolated showers are likely in the far north/northwest, and southeastern coasts, with the best of any sunshine across southern areas and eastern Scotland.

“On Friday night, isolated showers may continue in the far north/northwest overnight, but elsewhere dry and rather cloudy.

“Under any clearer spells it will turn frosty, with some freezing fog developing by morning.”

“It will feel a lot chillier than we’ve had lately – temperatures are unlikely to get out of single figures for the rest of the week.

“The weather pattern will lead to widespread frosts and freezing fog, which is caused when air is very still in cold temperatures.

“Freezing fog is likely to be most extreme in valleys in southern England like the Chilterns. Luckily there won’t be a problem with ice on the roads as there’s not much moisture around.”

Snow is prospected for parts of northern England from Wednesday January 10 next week as a triple polar vortex delivers another icy attack.