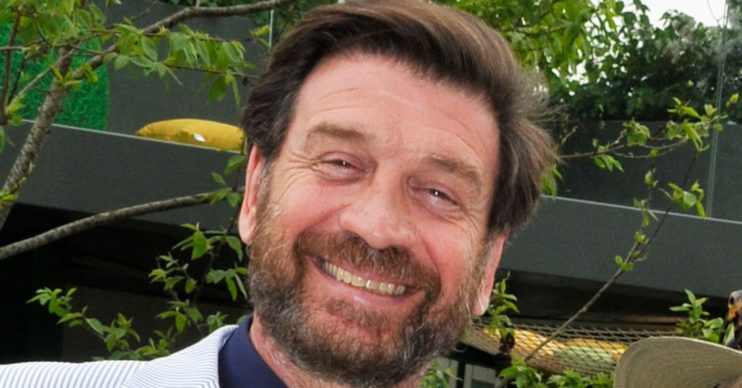 Fans distracted by the presenter's shoulders

Nick Knowles, host of DIY SOS, had his fans’ hearts pounding as he ditched his shirt for a topless selfie on Instagram.

The presenter, 57, posted a snap of himself to social media wearing a mask that one of his pals gifted to him.

What did DIY SOS star Nick Knowles say on Instagram?

In the caption, Nick asked the creatives among his fanbase to come up with a design for a DIY SOS-themed face covering.

But it appears many of his followers were distracted by the fact he wasn’t wearing a top in the photo.

In the comments, one fan said cheekily: “Camera needs to be lower, Nick.”

Another joked: “I hope you’re wearing more than a mask.”

A third said, alongside a heart-eyes emoji: “Look at those shoulders.”

Someone else simply wrote: “Sexy.”

“Nice mask and shoulders,” another admirer told him.

Look at those shoulders.

A fifth echoed that, commenting: “I noticed shoulders.”

“Oh my!” exclaimed another.

Looks appear to run in the Knowles family, too.

Last month, he stunned fans when he shared a picture of his “much nicer” brother on Instagram.

Posting a photo of the two of them, Nick wrote about working with his older sibling John on a BBC show called Historionics.

He said he tasked John, a talented musician, with learning to play a medieval instrument in a matter of weeks and writing songs for the show.

Nick explained: “Before he arrived an actor asked me, ‘What’s your brother like?’ I said, ‘He’s like me only much nicer’. Not only did he appear in the show but he played guitar and sang with us all late into the nights of filming in the hotels we stayed in. The hangovers were immense.

“Everyone loved him so much I had to write him into every other episode. On the last day of filming, all the actors and crew from the series came to say goodbye to him. There was much hugging and as his car disappeared up the road, the same actor turned to me and said, ‘He IS like you only MUCH nicer’.