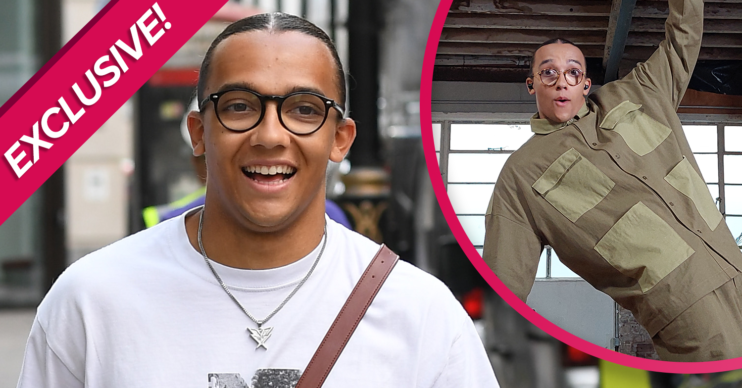 Diversity star Perri Kiely has revealed his bandmates “rely” on each other when faced with backlash from trolls.

The boys divided opinion with their BLM dance on Britain’s Got Talent last autumn.

And Perri exclusively told Entertainment Daily that the boys manage to bat off negativity from trolls simply because there’s “safety in numbers”.

What did Diversity star Perri say about trolling?

Perri and his Diversity bandmates appear eternally upbeat, but in the face of some pretty harsh backlash over the years, just how do they manage it?

The dancer explained: “One main reason is because there’s so many of us. Safety in numbers.

“If you want to get to one of us you’ve got about 15 of us to get through. We’ve got each other to rely on.”

Read more: Ashley Banjo admits he ‘only has to look in a direction people don’t like’ and he gets abuse

He also added that it’s “definitely easier said than done but just ignoring it” also works.

He added: “You could have 100 good messages but if you get one negative one you’re always going to focus on that.

“You’ve just got to not worry about it. Just get on with it and do what you love and enjoy everything about life.”

Perri also admitted that he’s been “quite lucky” in that he doesn’t have any regrets when looking back at his life and career.

“I feel like I’m quite lucky, I’m alright,” he admitted.

“I don’t think you should ever regret something. I’m a big believer in everything happening for a reason. I feel like you should learn from everything you go through in life.

“Yes there’s high points and there can be some super low points as well. But like I said, learn from those and just grow.

“Lockdown was a big turning point for me. For many people it was quite a down time but for me it gave me time to understand myself a bit more and realise what’s important.”

Perri danced his way through lockdown

The Diversity star used his spare time in lockdown wisely, it seems, and admitted that social media and dancing have been his “saviour”.

Perri admitted that, although it sounds “super cheesy and like it’s from a dance movie”, dance always lifts his spirits.

I don’t think you should ever regret something. I’m a big believer in everything happening for a reason.

As such, he’s teamed up with Samsung to share the love and teach his followers some signature moves on TikTok.

Perri said: “If I’m not having the best day I’ll go to the studio. It’s all about taking your mind off the thing that’s worrying you. People have different ways to cope with that but mine is dance.

“The past year has been a strange one and lots of us have taken up new skills – and one of those is being on socials and dancing to get rid of that boredom,” Perri said.

“So I’ve teamed up with Samsung to share my favourite dance moves and tips on TikTok.”

He assures ED! it’ll be “nothing hard to follow” and we’re predicting it’ll be a hit when it launches next month.

Research by Samsung suggests one in five have learned a new skill since the start of the pandemic.

Meanwhile, 71% have watched dance moves on social media and 65% of Brits admitted that dancing in lockdown lifted their mood.

What’s next for Diversity?

So, on the subject of dancing, when can we see everyone’s favourite dance troupe back on the road?

Perri admitted he “cannot wait to get in front of a crowd again” and Diversity fans will be thrilled to hear their 2021 tour has been rescheduled for next year.

Asked about support from their fans, Perri admitted: “It’s amazing.

“Even just looking at where we are at now. We won BGT 12 years ago. It’s crazy to think we’re the busiest we’ve ever been now.”

His bandmate Jordan Banjo definitely has a busy time coming up – he’s planning his wedding to fiancée Naomi Courts.

They’re tying the knot next summer, but Perri has revealed that a “phobia” will mean he won’t be best man.

The pair work on the Kiss FM breakfast show together, so surely he’d be the obvious choice for the role?

“I feel like Jord spends so much time with me that would be the last thing he would ask me to do,” Perri admitted.

He added: “And do you know what, this really freaks me out, I don’t know if this is bad, but if someone asked me to be best man, I’ve actually got a real phobia of public speaking.

“I feel like best man just means a speech so I would kindly decline. I’d have to. I don’t think I could do it, even if I knew everyone in the room.

“I’d rather dance in front of a crowd of millions than speak in front of one person in a room.”

So is marriage on the cards for Diversity star Perri?

The pair have been “bubbled up for quite a while”, he explained.

“It’s been a bit mad but Laura’s actually my first girlfriend – it actually took me 24 years and a global pandemic to find a girlfriend so it had to work,” he laughed.

“We’re just enjoying it. We’re both back to work. It’s cool.”

So could the two of them be next down the aisle, should Laura catch the new Mrs Banjo’s bouquet?

Diversity star Perri Kiely will be hosting a virtual tutorial on the UK’s trending dances on the Samsung KX Hub from May 4, shot on the Samsung Galaxy A52 5G.