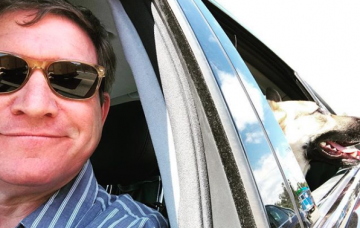 Stoney Westmoreland has been fired from Andi Mack following charges

A Disney Channel series actor has been arrested for reportedly attempting to have sex with a young teenager.

Stoney Westmoreland, 48, plays a recurring character in Andi Mack, a family drama following the lives of a middle school pupil and her friends.

According to media reports, Westmoreland communicated with the 13-year-old after matching with them on a dating app.

It is also claimed he requested naked photos from the teen and sent pornographic images himself.

Westmoreland later tried to meet with the victim, using a travel-sharing app to order the teenager a car.

It is believed that is when Salt Lake City Police Department and FBI Child Exploitation Task Force officers took him into custody.

Westmoreland – who has also made TV appearances in Weeds and Gilmore Girls – has been charged with four counts of dealing in materials harmful to a minor and one count of enticing a minor by internet or text.

The Wrap reports Westmoreland has also been fired from his acting job.

Read more: Millions face council tax hikes of up to £107 to help pay for police

A Disney spokesperson is reported to have told the outlet: “Given the nature of the charges and our responsibility for the welfare of employed minors we have released him from his recurring role and he will not be returning to work on the series which wraps production on its third season next week.”

Earlier this year the scene showing Cyrus coming out to the show’s title character was nominated for Media Moment of the Year at the British LGBT Awards.

The series has also picked up award recognition from GLAAD for Outstanding Kids & Family Programming.