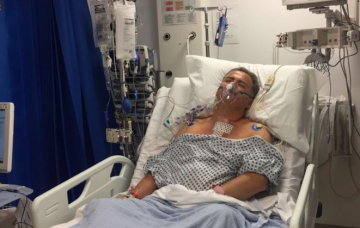 He thanked staff for saving his life

The thank you was accompanied by an image of the pundit in a hospital bed at the specialist heart and lung centre in London’s Chelsea, hooked up to an oxygen mask and drip.

“Emotional now & I’ll regret this tomorrow,” he wrote to his 267,000 Twitter followers.

“Not a great year, mostly my fault – but this wasn’t.

“Thank you to everybody [at Royal Brompton & Harefield] for saving my life & letting me see 2018. Let’s all have a happy & healthy New Year.”

It’s unclear when the picture of Keys was taken, or exactly what was wrong with him, however it has been reported that the 60-year-old suffered a heart scare last summer.

The long-serving sports host found himself at the centre of controversy back in 2011 when recordings of him making unacceptable comments about female match officials went public.

He apologised, but left his job at Sky in disgrace and now works for BeIN Sports in Qatar.

In February last year, his estranged wife Julia Keys claimed she found out he was seducing another woman behind her back.

She claimed to have discovered that her presenter husband was allegedly having an affair with their daughter’s friend.

He was seen walking with 27-year-old Lucie Rose outside a hotel in London  a month earlier.

His wife of 34 years said she was furious after seeing late-night texts received from the younger woman to Richard.

In her first interview since the reports of the affair emerged, Julia revealed how she ended up replying to a message from Lucie while Richard was asleep – pretending to be him.

She said: “Suddenly a message came through from Lucie saying, ‘Are you OK?’. I took the phone and pretended to be Richard, and wrote ‘No. I’m not.’

“The response was: ‘You sound so sad. I wish I was there to give you a big cuddle.’ We went on messaging from there.”

According to claims from his wife, Richard had earlier responded angrily and defensively when she confronted him about the way he was “dealing with his phone”.

During the interview with Mail on Sunday, Julia also recalled how Lucie walked over to her and grabbed her during a birthday party for Richard.

“That was the moment I knew.”

The current status of the couple’s relationship is unclear.