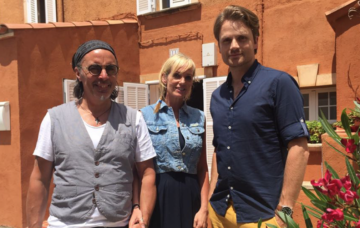 Amanda Sadler and her husband Gary were looking to escape "persecution"

The former detective who led the botched investigation into tragic toddler Poppi Worthington’s death has appeared on Channel 4 property show A Place in the Sun.

Ex-Detective Inspector Amanda Sadler’s husband Gary said they wanted to emigrate to the Spanish island of Majorca to “get away from the persecution”, the Daily Mirror reports.

They appeared on the TV show with a budget of £250,000 and were shown five homes by host Ben Hillman.

But the couple did not buy any of the three-bedroom townhouses they viewed.

Amanda, 52, was disciplined and demoted for failures in the police inquiry and later retired.

Poppi was just 13 months old when she died of suffocation in her father’s bed in 2012.

Gary, also a former police officer, told the Mirror: “Amanda has been scapegoated over the Poppi Worthington affair. Amanda was home in bed when all the evidence was lost.

“They well and truly hung Amanda out to dry. Others didn’t face their responsibilities.”

He added: “We went on the programme because we wanted to get away from the persecution by the media and by Cumbria Police.”

Poppi’s dad Paul, 50, was never charged over his daughter’s death.

He went to the High Court this week to challenge a coroner’s finding that the toddler suffered sexual abuse.

Did you see the show? Leave us a comment on our Facebook page @EntertainmentDailyFix and let us know what you think!