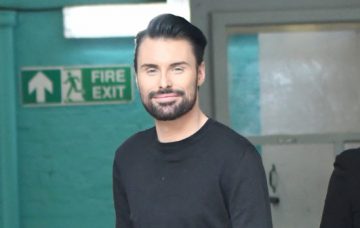 This would be great if true!

Rylan Clark-Neal may have accidentally let slip he could potentially be hosting a new series of Supermarket Sweep following Dale Winton’s death.

The 29-year-old This Morning presenter may have inadvertently revealed his new job after sharing a snap of documents featuring his face next to a new version of the gameshow’s logo on Twitter.

Posing for a pic with members of the Big Brother production crew, it appears former CBB winner Rylan was not aware the papers on a table in front of him were included in the shot.

And as well as prominently including his image, it was also possible to read some promotional blurb about the new show from the paperwork. Whoops!

The words read: “It’s time to go wild in the aisles once more as the classic Supermarket Sweep returns bigger, funnier, and wilder than ever before!”

The post has since been removed from Rylan’s account and he’s shared the pic again, however, this time the documents are cropped out.

Fans were quick to respond to Rylan’s new post, pulling him up on the mishap.

So we just gunna pretend like this didn’t happen pic.twitter.com/MggZTFTd4y

u so sneaky, i see you’ve cropped a wee bit out from the ORIGINAL pic, nice waaaan 😂🤦🏼‍♀️😂🤦🏼‍♀️😂 pic.twitter.com/2ynWzNsrJD

Cropped it out i see 😉

Supermarket Sweep helped make Dale – who died in April earlier this year – a household TV name when he presented nearly 2000 episodes of the zany gameshow on ITV between 1993 and 2001.

Read more: Rylan corrects Amanda Holden as she makes blunder on This Morning

The TV favourite returned to host the mid-morning show for a further 40 instalments in 2007 and revealed he hoped to do so again for another trolley-dashing series in one of his final interviews.

He told the TV Times in January: “I loved doing that show so if they wanted to do it again I would.

“Then again, I wouldn’t be surprised if they wanted 22-year-old to present it. I’d be devastated but, you know, that’s what happens.

“But I’ll always feel passionate about Supermarket Sweep because if it wasn’t for that show I wouldn’t have done anything I’ve done since!”

We think you’re perfect for the job Rylan!