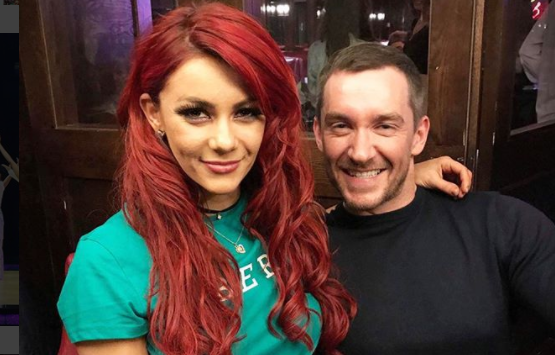 Dianne Buswell and Anthony Quinlan enjoyed a day out at Wimbledon on Thursday.

Strictly Come Dancing pro Dianne took to Instagram to share a string of snaps of herself and Emmerdale actor Anthony as they arrived to watch Serena Williams play in the semi-final.

Dianne, 29, slipped into plunging striped jumpsuit which made her red locks stand out while Anthony, 33, sported a casual look in a white tee and grey chinos.

She captioned the post: “A day @wimbledon with @anthonyquinny, thanks so much to Judy Murray for organising our tickets.”

The Australian dancer then posted another photo of herself and Anthony in front of the tennis court.

She wrote: “Wimbledon post overload! But has to be done!

“Today was so much fun witnessed the woman’s semi finals drank pimms ate strawberries and cream ….. and frozen yoghurt and it was all done with the best company,” adding Anthony’s Instagram handle.

Wimbledon post overload ! But has to be done ! 🎾 today was so much fun witnessed the woman’s semi finals drank pimms ate strawberries and cream ….. and frozen yoghurt 🤫 and it was all done with the best company @anthonyquinny 💗💓💕@wimbledon #wimbledon #💓

Fans couldn’t get enough of the sweet pics.

One person wrote: “You do make a lovely couple and so glad you enjoyed your day.”

Another said: “You two love bugs were made for one another,” while a third added: “Gorgeous, that photo makes me smile.”

Dianne and Anthony started dating late last year after apparently being introduced by actress Gemma Atkinson when she was competing on the show.

The couple, who rubbished split rumours in April, recently hinted they’re taking a big step in their relationship – getting a puppy!

In May, Dianne took to her Instagram stories to ask her fans if they thought it was a good idea.

Sharing a picture of her and Anthony sat soaking up the sun in a garden, she wrote: “All we need is a puppy @anthonyquinny.”

She then ran a poll on her Insta Stories asking: “Should we get a puppy? Yes/No.”

One fan told them: “I think a cute, adorable puppy would work in this very cute relationship! It would make you one cute little family!”

But it seems the pair may not have time for a puppy at the moment.

With Anthony continuing his role as Pete Barton in Emmerdale, Dianne is getting ready for the next series of Strictly.

The show is set to return later this year and it’s been confirmed Dianne will be a pro dancer on the show.