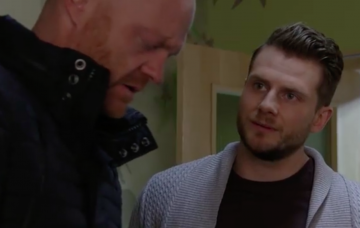 Just when we thought he'd turned over a new leaf

Max Branning’s been showing his nice side since his revenge plot landed both his girls in hospital, after their horrifying plunge from the roof of the Queen Vic.

Now younger daughter Abi is fighting for her life, while Lauren is learning to walk again – and Max is busy trying to right the wrongs he’s done to everyone in the Square.

Max is struggling to cope with Abi’s diagnosis and fighting the doctors who want to turn off her life support and let her die.

He’s been busy researching other patients who shared Abi’s bleak diagnosis but went on to recover from their injuries – and hoping that he can somehow get his fractured family back together.

So he’s pretty desperate when he discovers his other daughter, Lauren, is still planning to leave for Scotland with new boyfriend, Josh.

“Abi’s already messed up your plans,” Max tells Josh in a clip from the episode shared by the Radio Times. “You’d be happy as Larry in Scotland if she was dead.”

And he accuses Josh of “manipulating Lauren” into agreeing with the doctors that it would be kinder to let Abi die.

When Josh denies it, the old Max resurfaces as he hisses: “You’d better not, or you’ll be next in intensive care.”

And just to make really sure Josh knows he’s serious, Mr Branning adds: “I’ll switch you off myself.”

But that’s just Max talking in the heat of the moment, surely? He doesn’t really mean it – does he?!