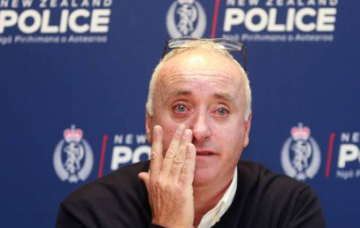 The father of a British backpacker missing in New Zealand broke down in tears as he made an emotional plea for her return.

Grace Millane, 22, from Essex, hasn’t been seen since vanishing on December 1.

Police have released a CCTV image of her last sighting in Auckland, where she had arrived two weeks earlier as part of a solo globetrotting trip.

Detectives have revealed that Grace was last seen at a four-star hotel with a man, who they have identified and spoken to.

But they say they have “grave fears” about her safety.

Her dad, David, a 60-year-old property developer, fought back tears as he urged anyone with information about his daughter’s whereabouts to come forward.

He said: “Grace is a lovely, outgoing, fun-loving and family-orientated daughter.

“She arrived here on November 20 and has been bombarding us with numerous photographs and messages of her adventures.

“We’re all extremely upset and it’s very difficult at this time to describe the range of emotions we are going through.

“Finally I would like to take this opportunity to appeal to anybody who has seen, spoken to or come into contact with Grace over the last few days to come forward with any detail, no matter how small, and contact the investigation team.”

He said: “Police have identified this man and he has been spoken to.

“Through our investigations we have also identified a location of interest, an apartment in the City Life hotel in Queen Street.”