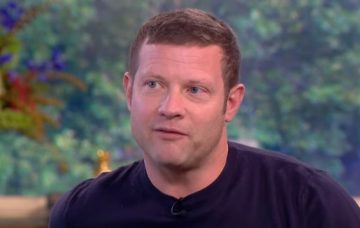 Dermot O’Leary reveals “full on” new addition to the family

Dermot O’Leary and wife Dee Koppang are the proud parents of a new cat. Aww.

The X Factor host, who wrote a children’s book based on his other cat, Toto, told OK! magazine that he and Dee have adopted a second furry friend… and it’s caused some sleepless nights!

Their new cat cat, Socks, is apparently rather playful.

The television presenter revealed he ended up sleeping in the spare room for a fortnight because he and Dee were worried about putting playful Socks in their bedroom, where Toto sleeps.

“I slept with Socks in our guest room in the attic for the first two weeks to make sure he was alright and then Dee and I were like, ‘We can’t not sleep in the same bed together!'”

Dermot first spoke about Socks during an interview on Good Morning Britain last year, where he said the couple were “breaking in a new kitten”.

He also showed off his scratched hands to prove it!

The telly favourite later took to Instagram to introduce his new pal, which he and Dee adopted from Battersea Dogs and Cats Home.

The telly favourite penned his debut children’s novel, Toto, The Ninja Cat, in tribute to his other cat, who has been blind from birth.

He explained on This Morning last year how he and wife Dee adopted two cats from Italy, after a stray cat they used to feed gave birth to a litter.

“We bought a place in Italy about ten years ago, in the middle of the countryside, and there are quite a lot of stray cats down there. We feed a lot of stray cats there. One cat turned up who was stray, but not feral, and we fed her over a period of time.

“We went back there about five years ago at Easter and she was heavily pregnant. I had to come back a day early for work but Dee was out there and called me and said, ‘Just to let you know, she’s having her kittens now in our pillowcase’.

“She stayed up all night and helped deliver four kittens.”

Dermot said that he and Dee had planned to adopt a dog that year, but felt it was fate telling them to go for a cat instead.

They ended up bringing two of the kittens, Toto and Silver, home with them.

Sadly, Silver died last year after being diagnosed with a rare heart condition.

“I think you’re either a pet person or not a pet person,” said Dermot. “When you are, you get it. When you lose a cat it’s like losing a family member.”

Dermot also spoke about Toto and how he initially refused to believe she was blind.

“She kept bumping into things and Dee thought she had an eyesight problem, but I said, ‘She’s fine!’ We took her to the vet and they said she can see breaks in light and stuff. And we quickly realised she has razor sharp reactions.”

It was those razor sharp reactions that inspired Dermot to pen Toto the Ninja Cat.

“I thought it would be a fun idea to turn it into a book where she is a regular cat by day and a ninja cat solving crimes by night.”